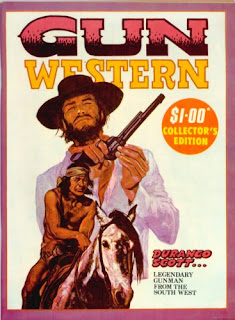 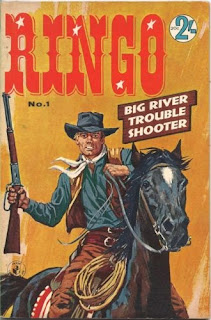 James has done some great work covering the history of the Ringo series on his website, so head on over for the lowdown. I don't have much to add other than to show off a cover scan of my own spiffy copy of Ringo #1... (It is a K.G. Murray #1 issue after all, right...? And it's not as if there's plenty around to choose from, right...?)
I can at least confirm that a couple of the Ringo stories are reprinted as Gringo in the Gredown issue Gun Western. "The Secret of the Swamps" and "A Cross in the Snow" in Ringo #1 are retitled "The Swamps Secret" (sic) and "Cross on the Snow" in Gun Western.
Gun Western also includes another Gringo story, "The Kidnapping".

And yes, this spiffy copy is mine too!
Posted by spiros xenos at 4:54 PM No comments: 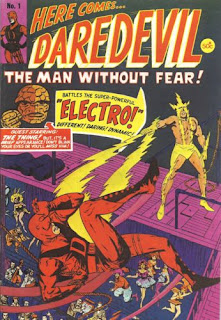 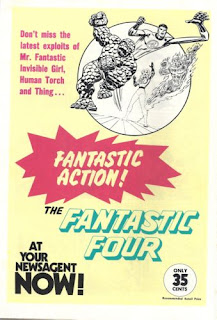 It's hard to tell whether the Yaffa/Page sub-editors intentionally - that is, with deliberation - altered the colour scheme on this cover, or whether they just inadvertently stumbled onto a red Daredevil costume, given the original cover of Daredevil #2 featured the yellow Daredevil costume. Either way, the Electro costume is wrong... unless there's a golden Electro in Marveldom that I'm blissfully unaware of...
Regardless of intent, this issue is a beauty for Daredevil fans, reprinting the first three issues of Daredevil in glorious black and white. The first issue is reprinted sans the splash page, but apart from that, and some editing of the next issue boxes (and the covers to #'s 1 and 3) I believe the reprints are complete.
I wouldn't be shocked to find this issue is reprinted later in this series, just as the Yaffa Avengers #1 is reprinted as #10 in the series.
The rear cover advertises The Fantastic Four series at a cover price of 35c. Curious, as the Daredevil issue has a 50c cover price. The same advertisement appears on the rear of Yaffa's Conan the Barbarian #1, which is also a 50c cover. The Avengers #1 also has the 35c Fantastic Four advertisement on the rear cover, the only difference the blue and red ad text components are reversed, which suggests to me The Avengers #1 was released slightly earlier or later than Daredevil #1 and Conan #1.
Posted by spiros xenos at 12:58 PM No comments: 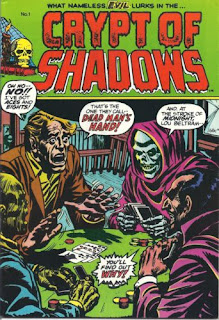 Well, it's only taken a bit over a year to prove my little theory, but I can now confirm that the unnumbered digest sized Where Monsters Dwell is indeed a facsimile reprint of the earlier standard size edition of Crypt of Shadows #1.
I'm not sure how long the COS series ran for, but I do know #'s 2 and 4 (and presumably #3) are digest sized, so #1 may be the only regular large size issue in the series.

It's well worth seeking out this larger edition for the greater printing clarity. The Wolverton and Maneely strips especially benefit from the larger scale, although the Heath reprint still suffers from a degree of muddiness, which I guess was inherent in the U.S reprint source.
Posted by spiros xenos at 12:23 PM No comments: