Gunman's Western #6: And Dell and Bramley 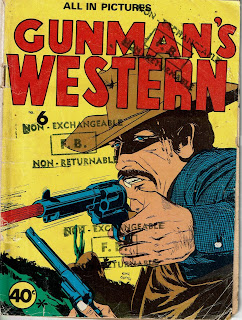 The contents of this issue are a little unexpected. Amongst the Marvel features are stories originally published as Dell features. Furthermore, the issue ends with a single page feature signed by Maurice Bramley: 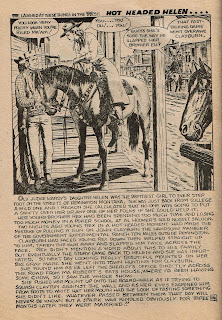 Posted by spiros xenos at 2:27 PM No comments: 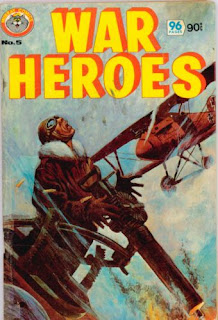 The question which has stumped me for a long time re: War Heroes #5 is this: Are there 4 other issues of the War Heroes series?

War Heroes #5 was published late in 1980. The copy on AusReprints has a 3 written on the front cover which suggests an on-sale date c.December 1980. However, James' data from the Mitchell Library - stamped 30 October 1980 indicates it was on the stands in September/October 1980.

There are 4 other War Heroes issues published by Murray that I am aware of, and given they share a masthead as well as a title, they are clearly related in the eyes of Murray. They are: 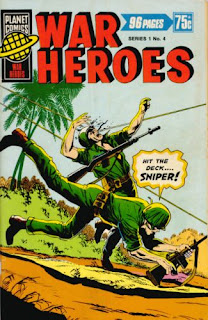 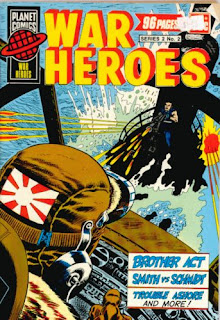 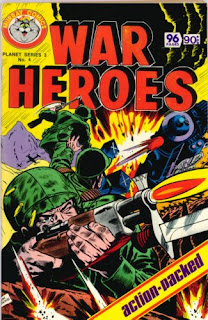 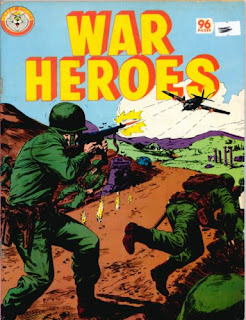 Now, admittedly, some of the dates above are a little rubbery - a couple may be out by a month or three - but they are serviceable as a guide for my immediate purpose.

So War Heroes #5 was published at the tail end of Planet Series 3, and likely shortly before War Heroes NN. If 4 other issues preceded War Heroes #5, some may have appeared on the stands around the same time as Planet Series 3 #4, or shortly afterwards. This is possible, but doesn't seem likely. I don't see this pattern reflected in other Planet Series titles.

For the moment I'm left with the conclusion that War Heroes #5 was misnumbered. Maybe it should have been #1. Maybe it was intended as a genuine Planet Series 4 issue.

Or, maybe there are 4 other issues in the series and I just haven't seen any in the last 20 years. TBA.

Posted by spiros xenos at 9:31 AM No comments:

This is the cover to my old copy of Federal Comics' Tales of the Legion of Super-Heroes #14: 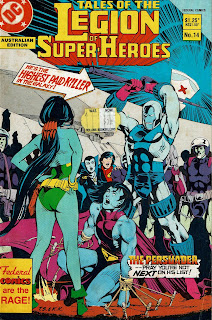 It's a nice copy in decent condition. The price sticker on the cover is a bit unfortunate as it has left a discoloured imprint on the inside of the cover, and it has prominent age spotting spreading into the book, on the covers, but it's fine for my purposes, which is as a placeholder in my collection, not being a series I'm particularly interested in. I read the first 12 volumes of the Legion of Super-Heroes Archives, which I thoroughly enjoyed, but the Federal series has accumulated over the years in the Junkyard more by accident than conscious collecting.

The other day this copy fell into my hands: 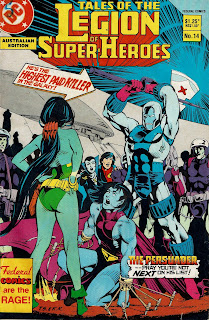 It's in a similar grade to my existing copy, trading a crudely scrawled pen mark for a sticker, and with little signs of spotting, but is otherwise identical in grade to it's predecessor. I could tell this much by the cover scan in my database, but as is my habit, I pulled out my old copy for a side-by-side comparison to see which copy would make the cut as the representative in my collection, and which would be traded or sold.

And I'm glad I did, because what I found was that the cover of the new copy was actually incorrectly attached to the wrong comic - rather than opening to the splash page for a chapter of  Shadows of Future Past, I was met by the pencils and inks of George Perez on the splash page of The New Teen Titans'' The Judas Contract Book 2: Betrayal! Yes, the cover to Tales of the Legion of Super-Heroes #14 is wrapped around the pages of Federal Comics' Tales of the Teen Titans #13!

Obviously this is an unintended error at a particular stage of the printing and binding process. It's understandable in one respect - the rear covers and inner cover advertisements and letter columns to both Tales of the Legion of Super-Heroes #14 and Tales of the Teen Titans #13 are identical, and both were published in February 1986. It's also probably no coincidence that this period marks the tail end of Federal Comics as a publishing entity, so this error may be symptomatic of a general waning of quality control.

So inspect your copies carefully - you may have a variant lurking in your collection. And if you only have the legitimate version, hunt down the variant quickly, before someone alerts the blogosphere to its existence and prices skyrocket on the variant market!

PS Photos would help illustrate this anomaly, but the only way to demonstrate this visually is to fold the covers to reveal the adjacent splash page of each issue, and I'm not about to damage my books to do so. If and when I get ratty copies of each I'll do so and update this post - in the meantime, ya just have to trust me.

Posted by spiros xenos at 5:55 PM No comments: