Another KGM/DC swipe - but whodunnit? 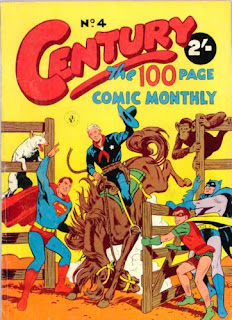 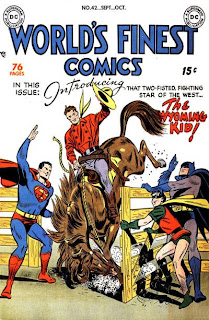 Here’s another interesting swipe - take the cover to World’s Finest Comics #42, add a few additional characters in Rex the Wonder Dog and Detective Chimp, convert The Wyoming Kid to Hopalong Cassidy, a few little extras here and there, and there you have it - the cover to Century The 100 Page Comic Monthly #4!

I’m not convinced this cover is by Hart Amos. For one thing, it’s unsigned. For another, the Superman figure/linework just doesn’t look like typical Amos, even allowing for stylistic camouflage due to swiping. And even Rex’s tongue looks uncharacteristically flaccid!

However, there is a hint of Amos in Superman’s and Hopalong Cassidy’s eyes… and a couple of other KGManiacs have discerned the Amos touch on this cover… so it’s certainly possible that Amos was involved.
Posted by spiros xenos at 1:38 PM 1 comment:

Batman #26: The Back O' Bourke Variant 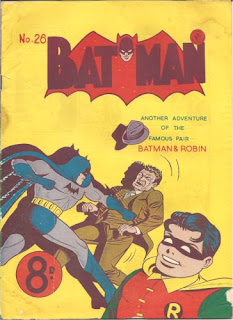 If DC publish a second volume of Batman: Secrets of the Batcave, I'll be looking forward to seeing the inclusion of "The Atom Cave Raiders", a nifty little Bill Finger and Dick Sprang production which was originally published in Batman #68, cover-dated December 1951-January 1952, and reprinted by K.G. Murray in Batman #26.

This is one of those reprints which has dialogue modified to reflect Australian place names, so in one exchange one criminal says to another: "You made a few mistakes in your past, Duane, and I know all about them! That business in Bourke -- that job in Brisbane - it would ruin you to reveal that now!" Hmmm... now I wonder whether the UK version via K.G. Murray maintained these place names, or substituted them for Hackney and Liverpool...
A colour reprint will also reveal just how much Batman and Robin were glowing due to the radiation after the atom bomb blast...
But I really don't have much confidence that this story will ever be reprinted again, given the apparent suspension of the DC Archives program on the one hand, and their propensity to recycle previously reprinted vintage Batman stories in new editions (Archives to Showcase to Chronicles...) on the other... OK, maybe that's a slight exaggeration, but it does seem that way... Maybe if they do ever deign to give us what we really want - a single hefty collection of all of Sprang's Batman stories - then we will also see this story reprinted... but I'm not holding my breath for it.
The cover to Batman #26 above is also by Sprang, modified from the cover to Detective Comics #136, June 1948. The background has been omitted, and some minor extension work is evident (Batman's cape and right elbow, the bottom portion of robin's chest and emblem), but a bit of judicious cropping would pretty much keep Sprang’s linework intact. The cover is also reprinted in Batman Archives Volume 7, which looks like being the last volume in the series. Here's hoping I'm wrong.
Posted by spiros xenos at 2:16 PM 1 comment: