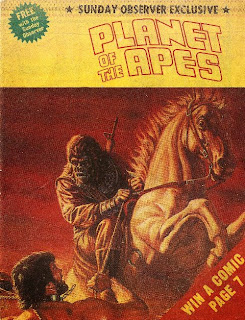 I don’t know if the recent earth tremors felt in Melbourne have had anything to do with shaking loose so many hard to find comics but it’s been an unexpectedly bumper period for collectors of scarce Australian comics. I can report off the top of my head from the last week or two:

A few other stubbornly elusive (if not bone fide scarce) issues such as Giant Flash Album #5, All Star Adventure Comic #50 and Superman Supacomic #113 were retrieved in, shall we say, somewhat irregular circumstances;

A bunch of very early Superman Supacomics and similar pre-decimal material was secured in a single lot with some fellow KGM Kronies;

And now comes confirmation of the long-rumoured second edition of the Planet of the Apes Sunday Observer Special. This cover scan was generously sent to me a couple of days ago from a fellow who says he has a few copies of each in pristine condition. The date on this issue is 15th June 1975, two weeks after the first supplement.
Posted by spiros xenos at 9:08 AM 3 comments: 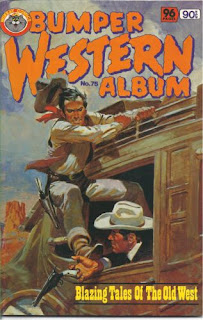 I picked up a few more K.G. Murray Westerns over the weekend, including this Bumper Western Album #75, which has an Alex Toth reprint: "The Real Johnny Thunder", originally from All-American Western #122, 1951, and presented here via Johnny Thunder #3, 1973 (full issue contents details available on the Ausreprints site).

It appears I've missed this in previous instalments of The Alex Toth Stocktake so I think a new stocktake might be due.

Posted by spiros xenos at 2:27 PM No comments: 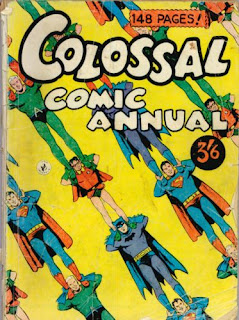 It was two and a half years ago. I remember I was ill with the flu and a fever. I had resolved to stay in bed for the next couple of days and not move an aching muscle. My wife was at work and my son had gone to his playgroup for the day, so there would be no distractions from much needed rest and sleep. I was dead set on not moving and had dosed myself up with sudafeds and whatnot appropriately.

Then the phone rang. This guy reckons he's got some comics I might be interested in. I'd dealt with him a few times before and admittedly scored some gold off him, but the last time I'd seen him he'd been dry, and I thought that would be it. So I wasn't in the mood for indulging him in conversation. Besides, he was prone to popping over armed with books and hanging around for one coffee too long. You know the sort.

So I just asked what he had, prompting him a bit to keep him on track but not really concentrating. I didn't really care about his digest-sized westerns and romance comics and whatever other narcotic titles he was reeling off.

But then he said the magic words. Colossal Comic Annual. He continued... no number... no back cover... a bit rough... Superman and Batman standing on one another...

I have no idea how I navigated traffic in my drug-induced stupor. All I know is that an hour later I was driving back home with the above Colossal Comic Annual NN/#1 on the passenger seat, and I've never been so distracted by a comic whilst driving. I'm sure I stalled at traffic lights and probably caused accidents along the way, completely oblivious like Mr. Magoo. But I couldn't resist. I just kept looking over to it and muttering to myself: I'm sitting next to my own copy of Colossal Comic Annual #1! I can only blame some of that on the drugs.

Needless to say, it sure cleared my sinuses.
Posted by spiros xenos at 5:07 PM No comments: 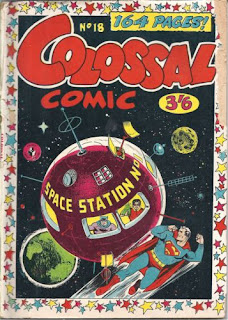 If you're just interested in the contents you can probably crib together a facsimile of Colossal Comic #18 by ransacking later issues of the series, along with a couple of issues of All Star Adventure Comic and Tip Top Comic Monthly, an issue of All Favourites Comic and Super Adventure Comic, and one or two other pamphlet issues.

And I wouldn't blame you if you resorted to this. Issues like this one are very difficult to find. The earlier issues may have more cachet, and may fetch the highest prices, but there's also more chance of finding copies of them. The Colossals numbered in the teens are some of the most difficult issues to find.

But there's more to Colossal Comic #18 than the contents, and it's all evident on the cover. Another beautiful outer space cover by Hart Amos, this time with a satellite front and centre (Space Station No 1? Not Sputnik I guess...) And Australia even makes a cameo appearance on the green mudball in the bottom left hand corner (Earth tended to be green on Colossal Comic outer space covers for some reason - see Colossal Comic #13 - let's call it another Amos trademark!) This cover is unsigned but, unlike Colossal Comic #15 discussed yesterday, the style is typical and representative of Colossal Comic and Amos of this period.

Oh, and just in case there’s any doubt, no, I haven't seen another copy besides this one, and yes, this one is also mine, and yes, I scored them both together, and... BWAHAHAHAHAHAAHAAAAAAA!!!!
Posted by spiros xenos at 4:16 PM 2 comments: 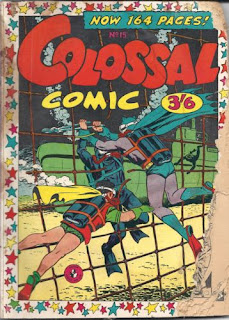 It might not be slab-worthy, but I don't care - Colossal Comic #15 is incredibly hard to find, and this is the only copy I've ever seen. And it's mine!

Contents-wise it's very similar to the issues immediately preceding it, with Captain Triumph and Taxi O'Hara (Hack O'Hara) features from Quality Comics brushing shoulders with regular DC features such as Superboy, Superman, Batman and Green Arrow. I haven't quite completed indexing this issue, but it does appear all the features previously appeared in K.G. Murray issues (TBC).

I'm curious about the origins of the cover image. It's odd enough that it doesn't feature Superman (this was more common in the last dozen or so issues of the series), but the fact that the figures are arranged so that their facial features are hidden is even stranger, especially for a cover. It looks like it may have been based on a panel rather than a cover. I'm quite sure it's illustrated by an Australian artist, and it may be that the Batman and Robin figures were adapted ie: dressed.
Posted by spiros xenos at 4:40 PM 4 comments: