Here's an in-house advertisement for Dracula #5: 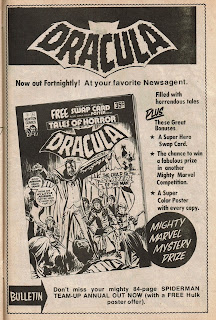 All well and good, but the buggers have mistakenly used the cover image to Dracula #6: 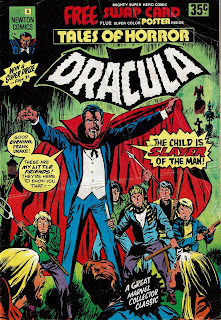 This is the cover to the Dracula #5: 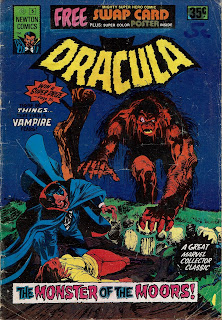 The muckup may be related to the fact that the main feature in Newton's Dracula #5 reprints the cover and main feature from Tomb of Dracula #6, at which point the alignment between the Newton and Marvel editions was derailed, and would be exacerbated in a few issues time. The alignment between the editions was initially compromised with Dracula #2 which was, in effect, a 'skip' issue, as the two editions did manage to get back on track for the next couple of issues but, as we can see, this was to be a shortlived correction.

I'm rather fond of such Newton errata, and the Dracula series is quite the goldmine in this regard, beginning with Dracula #1.

Posted by spiros xenos at 8:44 PM No comments: 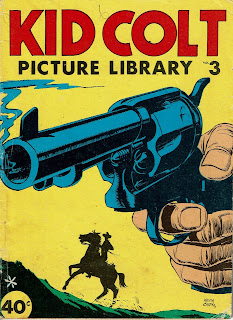 Kid Colt Picture Library #3 is a digest-sized Western comic published by Page Publications Pty. Ltd. c.March 1975. It has a $0.40 cover price, 64 pages plus covers, and a front cover illustrated by Keith Chatto. All good and regular so far - yet this issue is quite the oddity.

To begin with, the title is anomalous for a digest-sized Western Page Publications issue of this era. I don't recall seeing another such issue titled after a featured character. Sure, this was common for Page Publications series post-Newton Comics, and there were plenty of regular-sized Horwitz-spawned issues and series with eponymous titles such as Rawhide Kid, but the digest-sized Westerns published between 1970 and 1976 that I'm aware of  are of the rather traditional and generic Gunshot Western Library and Western Illustrated Stories variety, whether they carried familiar characters or not.

Further, assuming the sequencing of the stories is correct on AusReprints, the order has been changed in Kid Colt Picture Library #3.

The curiosity is that the subsequent edition should have more material and more pages than the previous edition. There are many possible reasons for this, and on balance I reckon the most plausible one is that Gunslinger Western #1 is a reprint of a previous 64-page issue but with material deleted due to a reduced page count. This would mean that the subsequent reprint has reinstated pages, not just extra bonus pages. But this is just my guesswork and is TBC.

Thirdly, to go back to the title - it's a hybrid of the character's name and the tried and true house-style Picture Library, yet the issue does not feature Kid Colt predominantly, nor does the Kid Colt feature kick the book off.

If all that isn't enough to qualify this issue as an oddity, then how about this: there is another Kid Colt Picture Library #3!  Now, I've seen plenty of recycled and retitled digest-sized Page Publications comics post-Newton Comics, and plenty of recycled, reprinted and renumbered regular-sized post-Horwitz issues, but I certainly don't recall this phenomenon from this era. Unfortunately the copy on AusReprints is not indexed, so I cant crosscheck the contents. Most likely this is a case of an incorrectly numbered #4 in the series. But something tells me this is merely the beginning of the inquiry into Kid Colt Picture Library #3. And as they say in the classics - the thick plottens!
Posted by spiros xenos at 6:12 PM No comments: