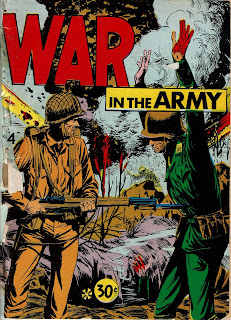 Page Publications' War in the Army #4 is a digest-sized war comic reprinting a number of 1950's Marvel war comics with art by the likes of Gene Colan, Joe Orlando, Joe Sinnott and Jerry Robinson, and a cover by Keith Chatto.

It was recycled by Page Publications a few years later, with a new Chatto cover, as Second World War Library #33: 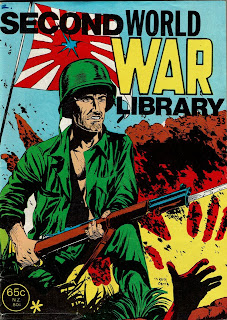 This issue is indexed on AusReprints.

Update 19/6/2018: This issue was published earlier than the above editions by Page Publications, again under a Chatto cover, as Wartime Library #5: 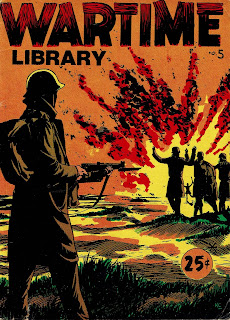 Update 7/11/2019: Here's yet another couple of issues with the same contents, naturally with Chatto covers: 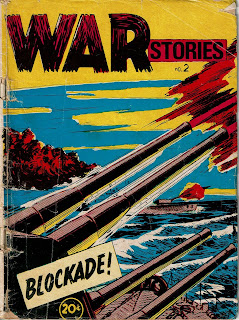 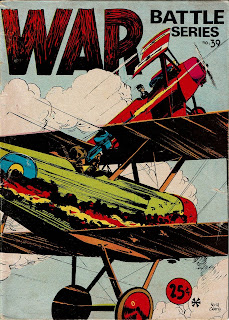 The cover to War Stories #2 is interesting as the cover promotes the second story in the issue, Blockade! (with exclamation mark added). I expect there is at least one more edition of this issue to be unearthed with a $0.20 cover price.
Posted by spiros xenos at 8:26 AM No comments: 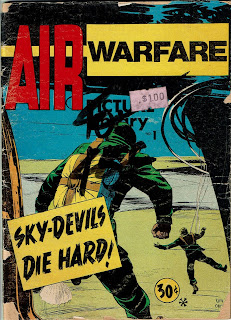 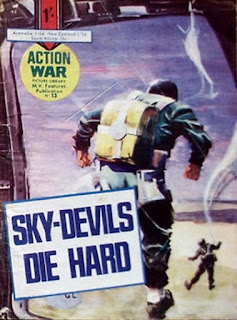 Such recreations of M.V. Features editions by Chatto are not uncommon in the Page Publications editions. It will be interesting to see if subsequent reprintings of this issue by Page pay homage to this image, or whether they appropriate an image from the interior art, say the splash page or some other key image.

For an example of this pattern, see Chatto's version of the cover to M.V. Features' Action War Picture Library #2 for Page Publications' War in the Desert #1, and the cover for the subsequent reprinting by Page for War Adventure Series #11. See also the cover to War at Sea #1, based on Action War Picture Library #24, reprinted with a new cover in Navy Battle Library #2 - the latter doesn't appear to have a signature, but to my eye, the waves are similar enough to other such illustrations to attribute it to Chatto. 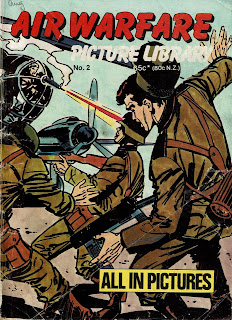 In this instance, the cover art is sourced from interior art: 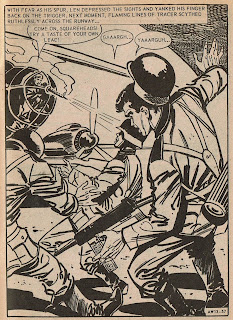 Posted by spiros xenos at 8:35 PM No comments:

A few years earlier Newton Comics published this story as the cover feature of their Historic First Edition of Captain America #1: 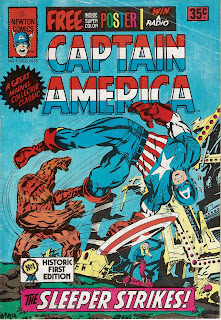 This issue also includes the first 5 pages of The Origin Of Captain America from Tales Of Suspense #63. As the GCD entry advises, this version of the origin is identifiable by the renaming of Professor Reinstein from the original version to Dr Erskine.

But I digress. It's curious to see The Origin Of Captain America reprinted in this issue. The only contemporaneous U.S printing of this story that I can find is from Giant-Size Captain America #1 from 1975, so presumably this is the source. If I find the other stories in this issue are also reprinted by Newton, that will settle that question.

My copy is missing the poster but I understand from the listing on AusReprints that it was of Dracula #7. 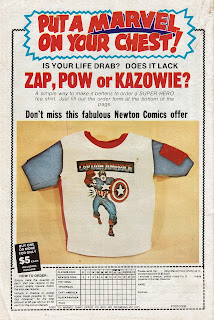 Posted by spiros xenos at 7:23 PM No comments: 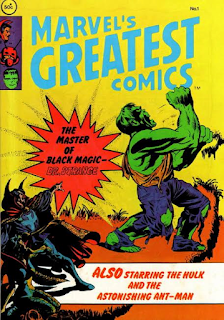 This is a composite image from two separate sources. 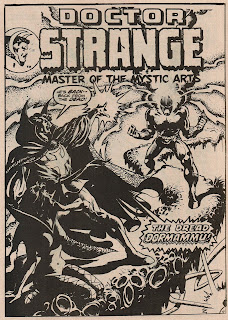 It also appeared earlier in Australia on the cover of Newton Comics' Doctor Strange #2: 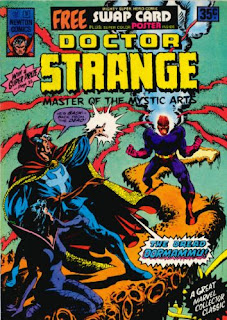 The Hulk segment originally appeared in The Incredible Hulk #3 as a splash page (or part thereof): 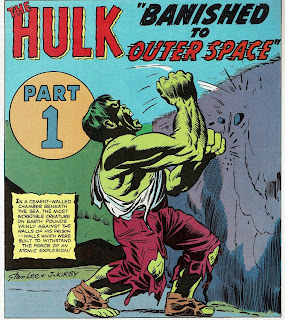 This scan is from the first page of my Fireside softcover edition of The Incredible Hulk. I expect that similarly to the Doctor Strange splash page above, it was reproduced in black and white in Yaffa's The Incredible Hulk #1, but I don't have a copy to check.

I don't have a copy of either of the first two issues of Marvel's Greatest Comics! to check whether these two stories are also reproduced within. They may be, but I don't really expect to find that they are.

Posted by spiros xenos at 9:34 PM No comments:

The iconic cover to Captain America #100 was reproduced, with slight modifications - and a major change to the background colour - by Yaffa for the first issue of their Captain America series: 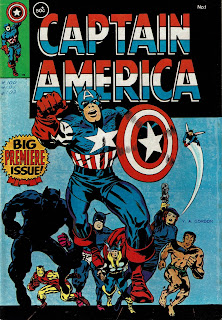 This issue was reprinted in digest form as Captain America #5: 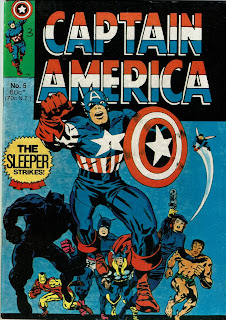 The cover for this issue was modified to advertise the third story in the issue, The Sleeper Strikes!, in lieu of the Big Premiere Issue! stamp. Such a modification was highly irregular for recycled Yaffa issues but I guess in this instance the motivation is self-evident. I date this issue to December 1980.

It was reprinted again as an unnumbered $0.75 digest-sized issue, with the Big Premiere Issue! boast intact: 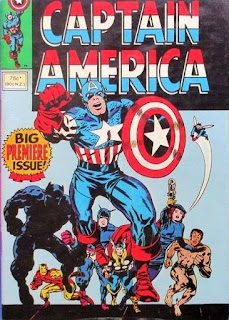 This issue would have been published some time after mid-1982.

This cover was reprinted at least one other time by Yaffa, before the $0.75 issue above, as Marvel Super Action #1: 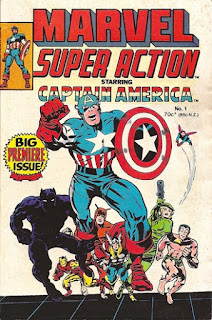 However, in this instance it is not a reprint of Captain America #100, but rather a reprint of Marvel Super Action #1 itself. I say this because the listing for this issue on AusReprints.net includes a scan of the splash page to the first story which, as I mentioned above, is missing from the Captain America reprints. This edition also includes some cover reprinting, so it is clearly from a different source to the other Yaffa editions.

I'm not aware of any other Yaffa reprints of this issue, but some if not all of these stories were published in other Australian reprint editions such as Newton's Captain America series.


Of course, readers of a certain vintage are familiar with this image in the context of Newton Comics courtesy of the free iron-on transfers which adorned the rear cover of a number of their issues: 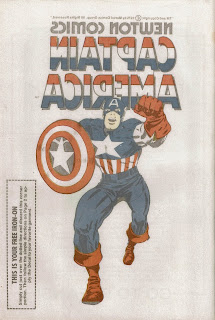 It was also on the cover of Newton's Captain America #3: 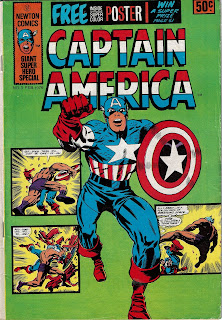 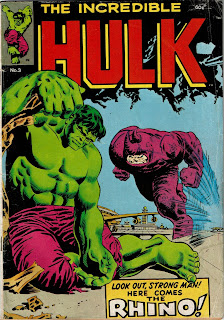 This is a regular/magazine-sized edition published in 1978 with a $0.60 cover price.

A few weeks ago I attempted to profile the Yaffa/Page Publications Marvel editions. The aim was to provide a guide to dating the issues based on the changing formats and cover prices. In doing so I also outlined some of the problems encountered and provided examples of anomalies to my schema.

One of the significant patterns to emerge was that the $0.75 cover price digest issues were all recycled editions of previously published Yaffa editions. These were unnumbered issues and were often retitled.

I have come across just one issue which bucks this trend: 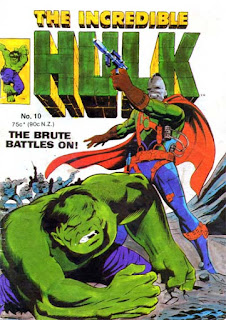 Generally Yaffa ended their series with a numbered regular/magazine-sized reprint of the first issue in the series. So this issue is anomalous for being digest-sized and $0.75, and for recycling a mid-term issue rather than a first or early issue to formally end the series.

As I say, I don't have a copy to check, but I'm pretty sure this was published early/mid-1982, probably April/May 1982, and may in fact be the first of the $0.75 digests -  a transitional issue before the fully-fledged unnumbered/retitled format was settled upon for the final stage. And I don't think there was a regular/magazine-sized #11/$1.10 issue reprinting #1. All supposition on my part - TBC.

Update: Having secured a copy I can confirm this is a 'short' digest edition.

Posted by spiros xenos at 9:54 AM No comments:

Chamber of Chills #4: Mopping up leftovers

We know that Page Publications did their best to present their reprints in an orderly fashion - consecutively numbered issues reprinting three U.S issues in order between their covers, and in some cases numbering their series as per their U.S counterparts. But sometimes things got out of whack and a bit of mopping up was required.

For example, Chamber of Chills #4: 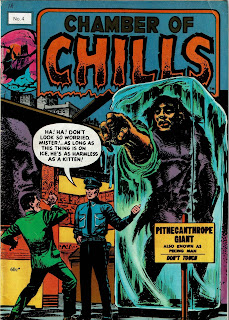 Given the pattern established in the preceding three issues this would be expected to contain reprints of Chamber of Chills #'s 10, 11 and 12. It does indeed begin with the covers and contents of Chamber of Chills #'s 10 and 11 - front cover honours to #10, and a black and white reprint of #11 on the inside rear cover - and the fact that the short stories contained herein are published in a different order to the U.S issues is but a trifling.

Murray and Yaffa would often need to come up with creative ways of accommodating the restrictions of their page count, say by reducing the size of the page or removing a splash page, printing pages sideways, or printing on the inside and back covers. I suppose the short stories in these issues removed the pressure of tampering with the artwork so they could offer complete stories which accorded with their page count.
Posted by spiros xenos at 7:45 AM No comments: