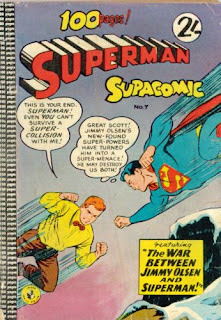 The Junkyard is proud to present a true gem: Superman Supacomic #7 - one of the scarcest, and thus most keenly sought-after issues of this series.

To the best of my knowledge this is the only copy to have surfaced in recent years, and I’m unaware of any other copies in other collections.

Indeed some of us hardcore collectors were beginning to wonder whether there really was a #7, so at the very least, it’s great to finally have confirmation that such a beast does exist, and put to bed another budding rumour of a missing issue.

Most of the contents would be reprinted in subsequent Australian reprints.

Here's a nice black and white scan of the censored last panel to The Gossips! which you may now print and paste over the Superman Supacomic advertisement in your copy of Haunted Tales #6.

This copy is courtesy of Ghoul Tales Vol. 1 No. 1, Portman Distribution Ltd., U.K.
Posted by spiros xenos at 3:57 PM No comments: 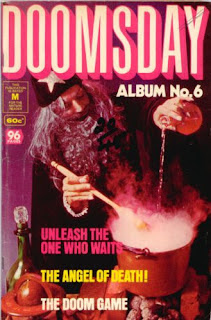 As mentioned a week or so ago, the first 8 issues of The Demon were reprinted in various issues of Doomsday Album.

I neglected to mention that the cover to the first issue in this run is a photo cover based on the splash panel to The Demon #1, featuring Merlin.

The majority of the Doomsday Album covers are painted images, however there are also some photo covers. They are in general generic enough to doubt they were solicited specifically for their respective issues, yet at least another 2 or 3 covers do appear to be related to the lead features.
Posted by spiros xenos at 9:18 AM 1 comment: 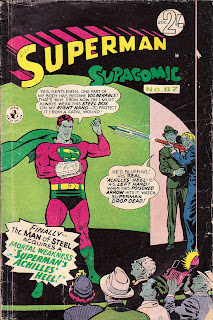 I don’t think K.G. Murray were as prone to rushing out issues with printing stuff-ups on their covers as Newton Comics were, but that’s not to say it didn’t happen.

Mind you, this sample is something of a variant because correctly coloured copies of this issue are the norm.

Nevertheless, it’s undoubtedly a candidate for the junkyard vomitorium… makes me feel queasy and off-balance just looking at it.

Thanks to Mr M for the scan. If I ever find a copy for myself I think I might just file it along with my Newtons.
Posted by spiros xenos at 8:09 AM No comments:

The Planet of the Apes Sunday Observer Special 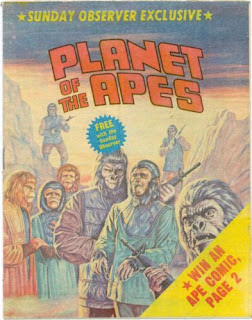 The Planet of the Apes Sunday Observer Special was a free giveaway with the Sunday Observer newspaper dated 1 June 1975, promoting the Newton Comics series and the television show.

The Newton series was launched mid-1975 and by all accounts was quite heavily promoted in the Sunday Observer with full colour advertisements.

This is a 16-page digest-size booklet. All the pages are black and white with red ink highlights, apart from the covers and centre pages, which are full colour. It contains a number of behind-the-scenes articles mainly related to the television series with plenty of photos. There is also a competition to win a copy of the Newton comic, and a full-page advertisement for the comic, but there are no comics stories or excerpts in this issue.

The Planet of the Apes Sunday Observer giveaway is one of the scarcest items on Newton Comics collectors’ wishlists, and unlike the majority of the series issues, it’s an item rarely seen in collectors circles these days. In fact I’ve never seen one before, even though I’ve discussed it on occasion with other collectors.

And this is where it gets even more interesting – there may be two different Sunday Observer Planet of the Apes giveaways!

Last time I met up with Kevin Patrick we happened to be talking about this supplement, so naturally I sent him a scan when I received this copy just a few weeks later, and he mentioned the one he remembers had a different cover, possibly an amended or cropped version of the cover to Planet of the Apes #2, and that it also contained comics, possibly excerpts from the Moench and Tuska adaptation which ran as a back-up serial in the Newton series.

Given the Sunday Observer was party to a robust advertising program for the series, it does appear quite possible that there were indeed two different Sunday Observer supplements. And, if the recall of collectors is accurate (and I’ve learned it’s a pretty safe bet to trust the memories of kids who pored over their comics obsessively… hey, some of us never grow out of it!) and there was another supplement (as per Danny Best’s blog possibly dated circa 1 July 1976... this date is a Thursday, not a Sunday, so maybe that's a typo...?) it also stands to reason the second supplement might feature the cover from the second issue, just as the first supplement features the cover from the first issue.

I’d love to see confirmation of a second supplement - but for the moment, I'm calling this the missing link (sic) of Newton Planet of the Apes collections!
Posted by spiros xenos at 7:42 PM 2 comments: