An overview of Haunted Tales The pre-Code ACG phaseThe first phase predominantly featured reprints from ACG horror titles circa 1951-54 (with a few earlier exceptions). Most of the material I have identified from these issues originally appeared in Adventures into the Unknown, Forbidden Worlds, Out of the Night, Skeleton Hand and The Clutching Hand.

There is also a smattering of material from various pre-Code Stanley Morse publications. Morse published a number of black and white magazines in the late 1960’s/early 1970’s such as Stark Terror, Chilling Tales etc. These were comprised of reprints of pre-Code inventory from not only Morse’s Gillmor and Key publications but also from ACG. Given this coincidence of material, it suggests these latter Stanley Publications provided the supply for the first dozen Haunted Tales. There were also Australian and UK editions of the Stanley Publications titles a few years later (from Page and Portman respectively).

Note also that the reprint of Basil Wolverton’s “Swamp Monster” in Haunted Tales #8 (cover reproduced above) is missing the last page, which I understand is also the case for the reprint in Stanley Publications’ Shock Vol. 1, No. 2, July 1969. That can’t be a coincidence! (For a complete black and white reprint see Tales Too Terrible To Tell #9, July-August 1993; for a complete recoloured reprint see Doc Stearn...Mr. Monster #3, March 1985).

Another interesting fact about the first dozen Haunted Tales is that the covers are original Australian illustrations. These appear to have been solicited for each individual issue as they each reflect the opening story of each issue – indeed they are usually adaptations of the splash panel.

The artists for the first 6 issues are unidentified. Certainly issue #’s 2 and 3 look to me to be by the same artist; issue #4 appears to be in a similar style; and there are discernible traces of the style even on issue #1, so the first 4 issues could possibly be by the same hand. However issue #’s 5 and 6 have distinctive styles, so by my reckoning there are at least three different artists involved in the first 6 issues. If anyone can enlighten me further on the artist’s identities…

The covers for issue #’s 7-12 are possibly of even greater interest as they are not only in a distinctly different style to the first 6 issues, but they appear to be the unsigned work of Phil Belbin. Belbin was a prominent and popular Australian artist who produced artwork for a variety of publishers (including other K.G. Murray publications). He was also Art Director for Gredown, and a number of unsigned Gredown covers are believed to be by Belbin (I hope to cover these in a future blog).

I’m confident that Haunted Tales #’s 8, 9 and 12 are the work of Belbin. There is a good chance that the other three issues (#’s 7, 10 and 11) form a set from Belbin, but I will await confirmation from those more familiar with Belbin’s style before I assert it more firmly.

The DC/Charlton phaseAfter the first 12 issues the profile of the series changed. For one thing, the covers were no longer original Australian pieces – they were reprints of US comics, with altered text and mastheads.

For another thing, the material was no longer exclusively pre-Code horror – rather, it mainly consisted of contemporary material from DC titles such as Unexpected, Ghosts, The Witching Hour, Secrets of Sinister House, House of Mystery, House of Secrets, Weird Mystery Tales, Forbidden Tales of Dark Mansion – even the occasional Strange Sports Stories or Black Magic feature could be spotted.

There was also a fair representation of Charlton material, particularly in the early part of the post-ACG phase. Indeed the first three issues of this next phase sported Charlton covers - a couple from Tom Sutton and a painted cover by Pat Boyette. Following these exceptions, DC covers became the default option (most if not all from Unexpected and House of Mystery) just as the series itself came to be comprised exclusively of DC material.

Which is not to say there was no longer any vintage material appearing in the series as there were plenty of reprints sourced from DC’s archives via their 100-Page Giants, thus the likes of Joe Simon and Jack Kirby, John Prentice, Ruben Moreira and Curt Swan rubbed shoulders with contemporary artists such as Jerry Grandenetti , Jack Oleck, Tony deZuniga, "Rubeny", Frank Redondo and Alex Nino. And there were also some unexpected surprises popping up now and then, such as a Phantom Stranger or Johnny Peril feature, and even the odd Marvel story too.

Haunted Tales maintained the M rating until the final issue, but this was no longer mandated by the contents (if it ever truly was). By this time the title had long been a DC-centric horror book with nothing scarier than a graveyard or a skeleton or a devilish beast on every second cover. It was Code Approved material in a book which could sit rather comfortably alongside the other Code Approved superhero titles in Murray’s stable. Indeed #35 sported the 1979 Murray Publishers logo for the first time, and #’s 37 and 38 brandished the Murray the Cat logo, making them look unambigously like regular DC/superhero kid’s books.

The last 7 issues witnessed a page count increase to 96 pages (100 pages including the covers) with a 90c price tag (95c for the final issue). I think of these as the Haunted Tales Album issues (Murray titles typically converted to Album with a substantial page increase eg. Doomsday).

My thanks to Kevin Patrick for his help in preparing this article.

UpdateA few points to add following some offline correspondence.
1. It is possible there is a higher numbered issue than #45, but I have not see one.
2. My notes said Haunted Tales #1 was published in late 1972 with a 30c cover price. Having reviewed the data to hand I now believe it was published c. February 1973.
Posted by spiros xenos at 1:37 PM 2 comments: 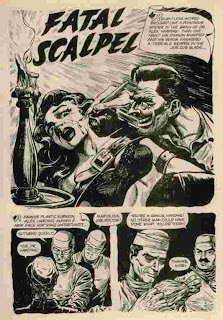 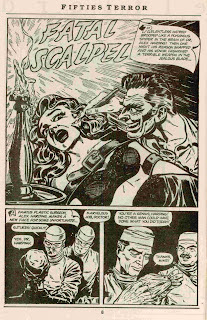 The first is a scan of the first page of “Fatal Scalpel” as it appears in Gredown’s Horror Experience # 1, c. 1976. The second scan is of the same splash page as it appears in Eternity Comics’ Fifties Terror: Classic Pre-Code Horror #4, 1989.

Close inspection reveals the first scan to have far more pencil and ink detail compared to the second one, with more shading and, of course, blood on the face of the victim. Given the order of publication one would assume the second scan had been cleaned up, but that is not the case. This is an example of a pre-Code horror story which was reprinted for horror magazines (such as those published by Eerie Publications) with altered art work to increase the gore factor, and which found their way into Gredown’s titles.

“Fatal Scalpel” originally appeared in Haunted Thrills #5, January 1953, and it’s a truly deranged pre-Code horror story which I highly recommend to anyone who appreciates grisly revenge stories. I don’t know who the artist is but I understand from another collector that it is likely an Iger shop artist who did not do a lot of work for Iger and thus may be identifiable (TBA).
Posted by spiros xenos at 4:05 PM 2 comments:

World's Finest Comics #38 and Batman Comics #3: Now that's what I call a Team-Up! 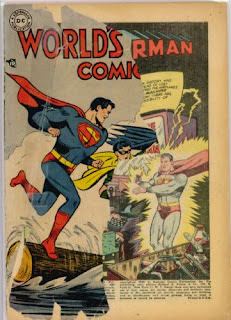 I don’t have many genuine US Golden Age superhero comics. Even my collection of Australian Golden Age comics is minimal, the overwhelming majority being Silver Age comics.

So how ironic it is that one of the very few US issues that I do own is not only missing half the cover, but the missing portion happens to be a perfect match for one of the very few Australian Batman issues I own from the 1950's. And I don’t even have to erase the Superman figure on the Australian issue to make it fit!

I spotted this issue of World’s Finest and didn’t have too much time to think before committing to it, but I knew I wouldn’t have to go too far to complete the cover. Talk about striking while the irony is hot!
Posted by spiros xenos at 4:52 PM No comments: 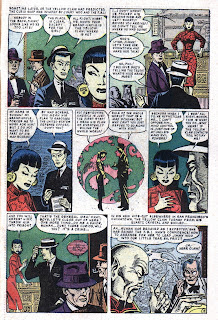 Thanks to the good folk on the Timely-Atlas chat list I can confirm the original story is indeed 6 pages, and I present a colour scan of the missing Page 2, originally from Yellow Claw #1, October 1956.
Posted by spiros xenos at 11:56 AM No comments: 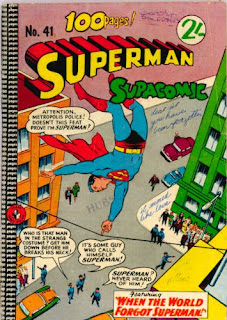 I don’t know Carolyn Saunders. And I don’t know whether she finished her ‘Dear John’ letter or not. But it appears she rehearsed her lines on this copy of Superman Supacomic #41, and I must say it rates as the most civil of break-up letters, as well as the most notable and unexpected comics marginalia I have come across to date.
I wonder whether it was the fellow's own copy she was practising on...? Personally, that would have pissed me off more than the break-up...!
Posted by spiros xenos at 9:31 AM 6 comments: