Neal Adams, Batman and the Beatles - a Tip Top opportunity!

As a self-avowed - some may say unreconstructed - Beatles-nut, one of my enduring disappointments with my beloved K.G. Murray comics is that they didn't manage to publish this cover on an issue of Tip Top Comic Monthly: 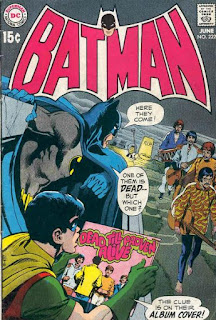 Batman #222 featured the Batman and Robin story "Dead...till Proven Alive!" which referenced the Paul is Dead urban myth of the late 60's. Not only that but the cover was drawn by Neal Adams at the peak of his Batman stint. In other words, a perfect storm of personal obsessions. A K.G. Murray edition would have capped the quadrella!

Of course, the story did appear locally, albeit hidden in the back of Mighty Comic #89.

And there was some minor compensation - the cover was cropped and adapted in the service of an inhouse advertisement for Batman comics in the Planet Comics era: 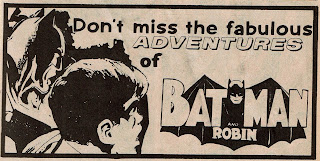 Hmmm... moreso a tease and a reminder of a lost opportunity rather than compensation...
Posted by spiros xenos at 6:27 PM 3 comments:

The cover is a recoloured reprint of Journey into Mystery #120: 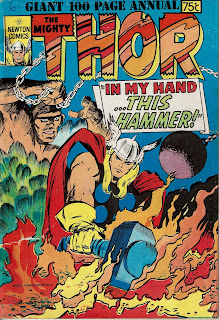 The first story reprinted in this issue is A World Gone Mad! from Journey into Mystery #113. However, instead of beginning with the splash page to this story... 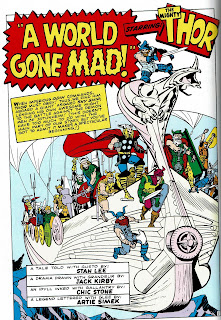 ...the Newton reprint begins with a black and white reprint of the cover to Journey into Mystery #113: 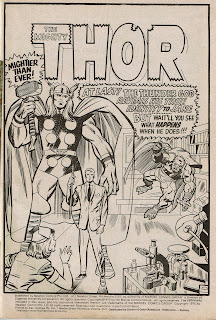 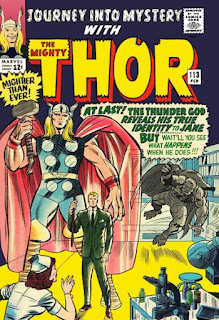 Newton Comics published quite a few Thor stories from the Journey into Mystery run, mainly as backups in their The Amazing Spider-Man title, and in the two issues of The Mighty Thor which were published in 1976. A few also appeared in various one-shots and specials.

Update 24/2/2019: When I posted this entry in April 2017 I had an incomplete copy of this issue. It was missing the rear cover. At the time I based the date on the indicia which states in part "Copyright 1975 by Newton Comics Pty. Ltd." Even with this information I asterisked the date in the entry. My copy had a 6 marked on the cover, presumably by the newsagency. This would mean the issue was published c.March 1975, which would be manifestly incorrect, so I knew the 1975 date warranted further investigation. In October 2018 I purchased an upgraded complete copy. I have since completed some research on the advertisements on the outer covers and can confirm this issue was published March 1977. This accords with the newsagency dating. In due course I will index this issue fully.
Posted by spiros xenos at 2:54 PM No comments: 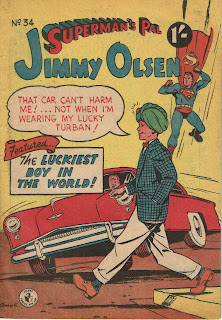 Superman's Pal Jimmy Olsen #34 features a Hart Amos cover for the lead story The Luckiest Boy in the World!, which originally appeared in the U.S issue Superman's Pal Jimmy Olsen #24 cover-dated October-November 1957. In the original issue The Luckiest Boy in the World! was not the lead story as it would be in the Australian issue so Amos was charged with coming up with an appropriate cover image.

To do this he adapted a panel from the story:

As you can see, Amos closely reproduces the staging of the original image, including the model of the car, but I like how he modifies Jimmy's walk from a step to a strut, which emphasises his boldness in the context of the story. And I also like the annoyed expression on Superman's face as he arrives to save Jimmy - the inclusion of Superman serves as a synopsis of the story in a single image more fully than the original single panel. The urban background is omitted by Amos, but this also works for the cover, leaving room for the various text requirements, and making it suitably abstracted.

Even the modified text in the speech balloon works. In the original, Jimmy is overconfident that something will save him, and is surprised when Superman saves him, expecting some other magic or chance to intervene on his behalf. In the cover version we see that Superman knows Jimmy's lucky turban won't help him and appears annoyed and frustrated at Jimmy's blind faith. The reader senses that this has happened before.
Posted by spiros xenos at 8:50 AM No comments:

Some time ago I attempted to catalogue all the Alex Toth reprints which appeared in various K.G. Murray titles. If you do a search for "Alex Toth" on this blog you'll find a number of posts in this regard.

What I didn't do at the time is consider the Toth reprints in Gredown magazines. I still don't have a complete list but for the moment I'd like to flag Sorcery #2: 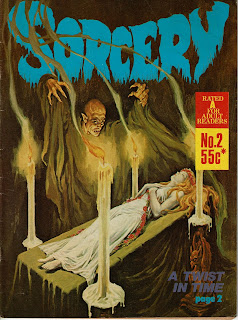 This issue contains two Toth reprints - ...If I Were King, and The Man Who Tried To Kill Death.

...If I Were King was later reprinted in Gredown's Claws of Horror, and I'm pretty sure The Man Who Tried To Kill Death appeared in Duel of Death.

And while I'm at it, A Job Well Done appears in Strange Experience #5, later reprinted in Skulls of Death.

Hardly a complete list, of course, but something of a starter pack if you're so inclined.
Posted by spiros xenos at 8:34 AM No comments: 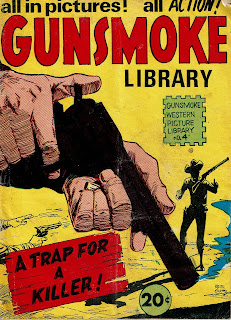 A Trap for a Killer! is the first story in the issue, featuring Kid Colt, Outlaw.

The advertiser's date code on the rear cover is PP 1.72, which suggests this issue was on the stands very late-1971/early-1972.

The issue was reprinted shortly afterwards by Page Publications as Gunshot Western Library #27: 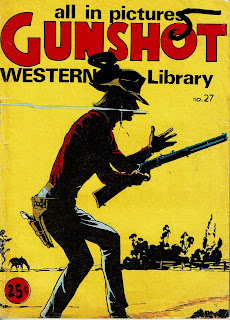 This issue has a $0.25 cover price and a new Keith Chatto cover. 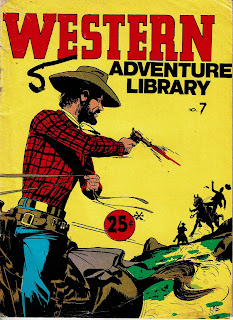 So whilst it's inconclusive, for the moment I'm going to run with the idea that both these issues were on the stands circa mid-1972, which approximates the guestimates on AusReprints. 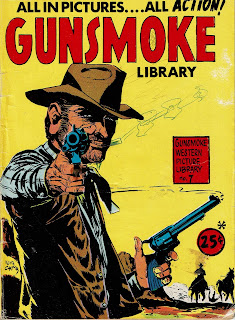 Yet another edition was published as Fast Gun Western Library #1: 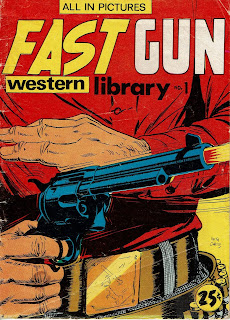 Again, the date is not known, but at least three $0.25 cover price editions were published in rather quick succession. 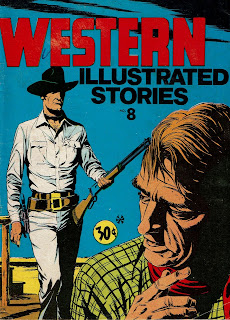 Posted by spiros xenos at 8:57 AM No comments: