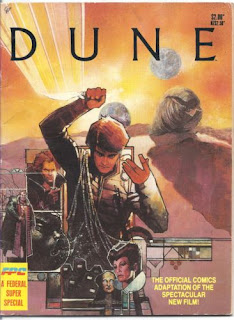 This Federal Super Special edition of Dune is a facsimile copy, from front ocver to back cover, of the Marvel edition, which was part of the Marvel Super Special/Marvel Comics Super Special series of album-sized comics. This Marvel series of comics was virtually a separate imprint, printed with cardstock covers and focussing on movie properties and adaptations such as Conan, 2010, Star Trek and pop music-related content such as The Beatles and Kiss.
Federal put out a few of these with similarly upscale production values – the larger dimensions, the cardstock covers, the full colour reproduction, and the “A Federal Super Special” banner or text box, indicating a line of sorts separate to the rest of the Federal line-up. Some of the titles Federal published included Sheena, Conan the Destroyer, 2010 and The Last Starfighter. Unlike their Marvel counterparts, the Federal editions did not have their own series numbering. For example, the Marvel edition of Dune is Marvel Comics Super Special #36 – The Federal edition is unnumbered.
These Federal editions are about as upscale as Murray/Federal comics ever got – large full-colour pages, cardstock covers, no advertisements, premium cover price; a long way away from the black and white more-bang-for-your-buck reprints, and on the cusp of the wave of graphic novels which were about to hit the comics reading market. So consider these few issues circa 1984 as the Federal Comics series of graphic novels. It’s only a bit of a stretch, and I don’t think anyone would begrudge them the courtesy.
Posted by spiros xenos at 3:44 PM No comments: 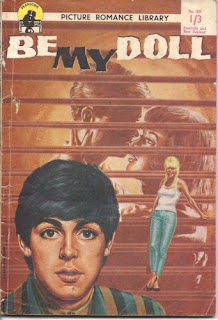 You don’t have to be a Beatles expert to know this comic was published circa 1965. Paul McCartney’s moptop is an acute enough cultural sign to tell you this was published before 1967. And if that doesn’t tell you, maybe the pre-decimal cover price for Australia and New Zealand will do the trick.
You won’t find much about the Beatles or McCartney in this romance comic, other than a passing reference to Liverpool. But that won’t worry the sub-group of comics collectors who are Beatles Comics collectors. These collectors are interested in any comics which reference the Beatles. Some of these collectors are not really comics collectors per sel, but rather Beatles fanatics who, I presume, are just as interested in lunch boxes and underwear with the Fab Four emblazoned upon them.
I’m a bit different - avowedly a comics nut and a Beatles nut, but not a Beatles Comics nut as such. Sure, I’ll pick up a Beatles-related comic like this one if I come across it by chance, but I don’t seek them out or cross them off a checklist or anything.
This particular issue was published by C. Arthur Pearson, Ltd. in London, printed by Cahill & Co., Ltd. in Dublin, and price-badged for local distribution.
Posted by spiros xenos at 8:37 AM No comments: 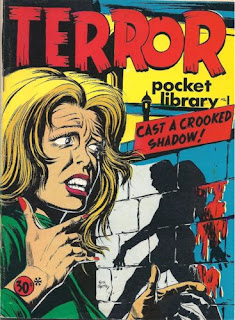 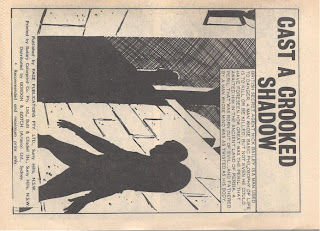 I’m no expert on Keith Chatto by any stretch, but I do appreciate his approach to cover illustrations in a series of Page Publications digest or pocket size comics.

In Terror Pocket Library #1 (above) Chatto copies the splash page to the story “Cast a Crooked Shadow”, which of course features just such a creepy hunchbacked shadow lurking in a deserted urban nightscape. Chatto’s improvement is to add dollops of blood on the wall - after all, the cover is in colour – and to promote to the foreground the image of a terrified woman, which amplifies the pulpy terror stakes.

He undertakes a similar renovation for the cover to Nightmare Suspense Library #5 (below) – again adding a close-up of a terrified face on the left side of the frame whilst replaying a scene from the interior, and again, making exquisitely gruesome use of the colour palette. 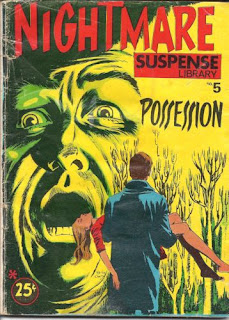 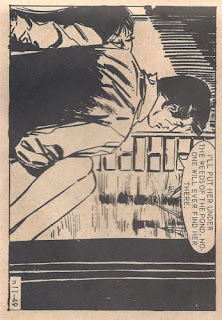 Nightmare Suspense Library #8 is a bit of a mix of the above two issues. On the one hand it contains a story featuring a British Secret Service agent named Nick Bailey, whose distinguishing physical feature is a single eye patch. This character is als 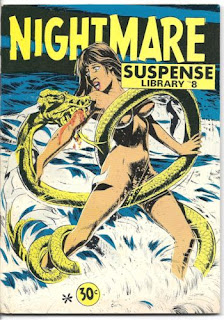 o featured in Terror Pocket Library #1, but not in Nightmare Suspense Library #5. And contrary to the pattern established in the previous examples, the cover to NSL #8 is not a rendition of a panel or action in the story – rather, it appears to be based on some other adult-oriented mystery/suspense/horror comic – probably from the UK/European source (see James’site or this site for more detail).

Or it may be something which is even more typical of Chatto – as I say, I’m no Chatto expert, but my antenna is now on alert for other such patterns related to Chatto and the variety of digest/pocket sized thriller/horror/suspense comics which permeated the Australian comics reprint market in the 1960s-1980’s.

Posted by spiros xenos at 8:16 AM No comments: