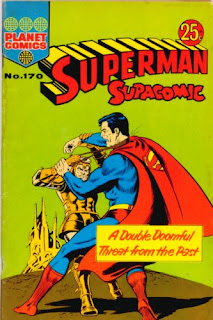 Here’s another cover like Superman Supacomic #97 which, for some reason, features a modified reprint of the splash page rather than opting for the image provided on the original US comic.

In this example it’s a doubly curious decision given this issue includes two of the instalments in the rather odd and rambling saga of Billy Anders (which I won’t bother trying to lay out here… there’s plenty of other sites which entangle themselves in this if you’re keen to google) and he happens to feature on the Superman #253 cover.

But I guess the image chosen looks a bit more action-oriented than the Superman #253 version.

And given the series had recently received a bit of a spruce-up with a slightly modified masthead effective from #166 (yes, you have to look closely!) to go with the new Planet Comics logo, well, maybe the sub-editors were just a bit keen to have some input into the presentation of the series.

And who would begrudge them wanting a bit of a say in how Superman Supacomic presented itself?. After all, it was the unofficial flagship title of the K.G. Murray stable!
Posted by spiros xenos at 5:00 PM No comments: 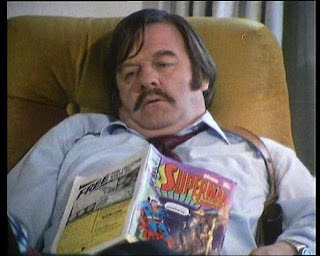 Poor ol’ Lucky… looks like not even his Superman Supacomic #202 can help with that hangover or bad curry… reckon there’s a bit of VB-induced Bargearse farting going on in that scene… Hey, kid – wanna Bargearse Pedigree copy of Superman Supacomic #172…? And yes, as it turns out, it’s the final issue of the series… Coincidence or Providence?

Five-Score #48: The Only Big Town Cover? 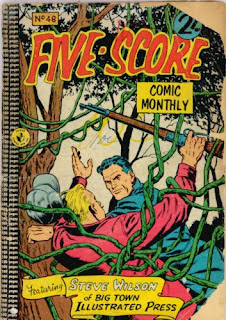 DC’s 1950’s series Big Town was a licensed property based on a radio drama. It ran for an even 50 issues, the last issue cover-dated March-April 1958

Big Town was reprinted in Australia in issues of Mighty Comic, All Favourites Comic, Five-Score Comic Monthly and The Hundred Comic Monthly.

The last few issues of the US title were reprinted in various K.G. Murray titles in 1958, shortly after their US publication, as expected. However, what is curious is that the US series continued to be published in the Australian titles for quite a few years afterwards. That is, the US back issues provided the material for the series to continue in Australia long after it had ceased publication in the US.

And I guess timing is also the reason why the only Big Town cover I can recall is the one above for Five-Score #48, circa April 1962, which as James points out, is an Australian adaptation of an interior panel, probably by Hart Amos.

It’s possible there are other Big Town covers, whether original DC covers or locally adapted images, but I just don’t recall seeing any.
I also don’t recall seeing any DC reprints of Big Town, not even in compilations such as The Greatest 1950’s Stories Ever Told. I wonder whether the licensing agreement is prohibiting this.
Posted by spiros xenos at 11:00 AM 3 comments: 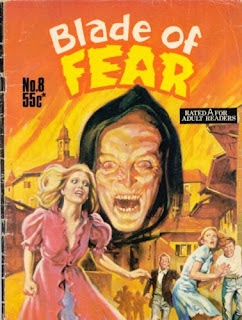 Talent for Terror!
Kenneth Landau
(Adventures into the Unknown #49, November 1953)

The Thing in the Cellar
(Horror Tales Vol. 1 #9, November 1969)
Note: This is an original story, not a reprinted nor a redrawn pre-Code story
Posted by spiros xenos at 11:27 AM No comments:

The junkyard experienced a little accident this week involving a freezing iTunes program which, to cut a long story short, amongst other things, resulted in the loss of of an excel file. Much of the data on the file can be stitched together again, but the main loss was my master file on the confirmed and unconfirmed Gredown horror titles and issue numbers. It also contained updated notes on a few titles I had been advised of recently.

It’s not a completely tragic loss. I do have back-ups of older versions of this file which I can access. But it does mean that some recently confirmed titles or issue numbers will have to be sighted again before the file is updated, and it does mean I ask anyone who sent me data in the last two months or so (especially after the Grand Final!) to please resend it to me (especially Danny, when you’re back!).
Posted by spiros xenos at 2:00 PM No comments: When I was a kid I loved the in-house K.G. Murray ads. Over the last few years it’s been a pleasure to identify the original sources for certain images which had, by increments usually reserved for water tortures, embedded themselves in my brain.

These days I still find them to be welcome, relatively unobtrusive space fillers which can occasionally and quite unexpectedly kick-start a short nostalgic revery.

They are, of course, not nearly as distracting as the full-colour full-page advertisements which pad out (pollute!) so much of the modern comics pamphlet. And I still think of them when I see trade paperbacks or other reprints of DC’s 1950’s and 1960’s material with logos or mastheads placed at the ends of chapters, mimicking the style of these old Australian editions.

Well, that was pretty much my take on them – unobtrusive and still charming – until I was alerted to the page above from Haunted Tales #6 by Dillon Naylor. As Dillon pointed out this was a conscious exercise in censoring a horrific end panel (is “punch-line panel” a suitable phrase…?).

The story “The Gossips!” originally appeared in Mister Mystery #13, 1953, and there is a complete scan of the story here, including the final panel.

So, apart from anything else, I will probably never be able to look at another advertisement for Superman Supacomic (or similar) in a K.G. Murray horror comic without wondering whether it might have been strategically placed for the purposes of censorship.

It begs further questions regarding the A and M classifications on the Australian horror reprints from the early 1970s. I understand there was some change circa 1969-1971 which led to the sudden surge in horror comics from K.G. Murray, Page and Gredown. I expect it’s somehow related to the relaxation of the Comics Code in this period, but I think there’s a story to be teased out about the Australian context.

And I must say that, gory as it is, it does surprise me that the panel omitted from Haunted Tales #6 didn’t qualify as suitable for a “Mature” book circa 1973.

Note also that at least two other stories (if not all of them) from Mister Mystery #13 have been reprinted in Australian editions – certainly “Vampire” appears in Haunted Tales #12 (and, I believe, in Chilling Tales of Horror NN (TBC)), and “Picnic” is reprinted at least once.

Update: https://notesfromthejunkyard.blogspot.com/2008/07/restoring-gossips.html
Posted by spiros xenos at 11:25 AM 1 comment:

Colossal Comic #17: The Prototype of the Colossal Arc Cover Cover artist: Hart Amos
Superboy The Adventures of Superman When He Was a Boy: The Man Who Knew Superboy's Identity!Otto Binder/Curt Swan/Creig Flessel
(Superboy #36, October 1954)

Superboy The Adventures of Superman When He Was a Boy: The Tree That Drove Smallville Wild!Curt Swan/Sy Barry
(Superboy #29, December 1953)

Superman: Superman's Other Life!William Woolfolk/Al Plastino
(Superman #84, September-October 1953)
Note: There are two Superman stories with the same title. This is the "disc jockey" story. The other one is the famous "Futuro" 3-parter originally published in Superman #132, October 1959.

Superboy The Adventures of Superman When He Was a Boy: The Wizard CityBill Finger/Curt Swan/George Klein
(Adventure Comics #216, September 1955)

Superboy The Adventures of Superman When He Was a Boy: The Super-Dog from Krypton!Curt Swan/John Fischetti
(Adventure Comics 210, March 1955)

Plus a number of fillers: Varsity Vic, Chief Hot Foot, What's the Difference Between..., Casey the Cop, Professor Eureka and Jail Jests.

Colossal Comic Annual #1 may be the single most sought-after Colossal issue, but this one must surely rate as one of the scarcest. I certainly haven’t seen one before, and I don’t know anyone else who has a copy. So if you do come across a copy, my suggestion is you do what I did: pay the asking price without blinking, count yourself lucky, and run before they change their minds.

It’s an interesting issue contents-wise, not least because of the unexpected inclusion of a Climax Color Comic reprint. Also interesting to find the lesser-known versions of “The World's Worst Archer!” and “Superman's Other Life!”. And always good to top off Colossals with one or two rarely-reprinted Sprang Batman comics.

Also interesting to note some of these stories were later reprinted in the regular K.G. Murray titles between 1965-1967. Two of the stories (“A Fish Out of Water!” and “Destination Future!”) appeared in Wonder Comic Monthly #30, October 1967, whilst another (“The Missile of Steel”) was placed in World's Finest Comic Monthly #30, October 1967 in the same period, suggesting this Colossal issue (like others before it) was targeted and plundered for back-up material. I expect to find even more of the contents of this issue appear in other titles/issue from the 1965-1967 period.

In this schema, the white shimmering circle on the cover of Colossal Comic #17 is not just another transitional moment in the development of this visual motif, but it may be deemed the genuine prototype. Earlier covers such as Colossal Comic Annual #4 and Colossal Comic #8 do have prominent yellow backgrounds, and other covers may also incorporate white circles in the frame. But this appears to be the closest of the early forerunners to a bone fide simulation of the final established model in which a shimmering light, or a ‘spotlight’ yellow arc is contrasted with the black background on which the logo is set.

There are a few Colossal covers preceding #17 which I haven’t seen yet, so it will be interesting to see whether there are any earlier arc prototypes!
Posted by spiros xenos at 4:55 PM No comments:

Superman Supacomic # 176: Hey Kid, Ya interested in a NM CGC Pedigree Mylar Band on the Run...? 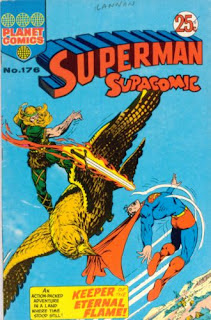 If, like me, you spent (too) much of your teenage and early adult years trawling through second hand record shops, garages, markets and fairs, then you’ll understand what I mean when I say it is manifestly true that there are way too many vinyl copies of Band on the Run, Frampton Comes Alive and Slade Alive! on the planet.

You’ll also understand what I mean when I say Superman Supacomic #176 is the Band on the Run of K.G. Murray comics.

And, just like Band on the Run – I cannot speak for Frampton or Slade – the difficulty in finding a decent copy is inversely proportionate to the oversupply.

Not that my current copy is so terrible – it’s quite nice, apart from the previous owner’s name written across the top of the cover, and some strange discolouration along the spine. But considering this is probably the fifth or sixth copy to pass through the junkyard, you’d think a decent unmarked copy would have found its way onto the I-used-to-have-this-as-a-kid-and-now-my-life-is-complete pile. Minor blemishes maybe, yet the equivalent of the skip on Nineteen Hundred and Eighty-Five on my third copy of Band on the Run…

“Will search for ever more…” indeed.
Posted by spiros xenos at 7:52 AM 2 comments: