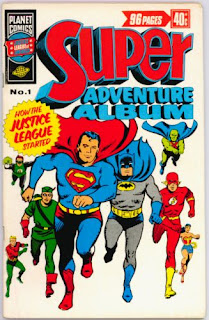 I don’t know how I missed this issue the first time around. I can pretty much recall owning most of the Super Adventure issues immediately before and after this issue, but not this one.

I was certainly familiar with the ‘new’ Super Adventure logo, which had been appearing on Planet Comics issues for a few years by the time this first issue of Super Adventure Album hit the stands in 1976.

If anything, the cover image should have attracted my attention, being a reformatted version of the Planet Comics advertisement which was everywhere in these comics at the time (sourced from 80-Page Giant Magazine G-8, March 1965).

All I know is that I didn’t see a copy of this issue until the last five years or so, and it may as well have been an ‘unseen’ pre-decimal issue.

Which is not as much an exaggeration as it seems, for this issue is a bumper issue of vintage DC comics, featuring Superman from 1946, The Flash from 1947, The Justice Society of America from 1948, Green Arrow from 1952 – and, to top it all off, a Silver Age classic - the origin of The Justice League of America from 1962.

Of course each of these reprints reflects contemporary sources, and you can check all the nitty-gritty details here on James’ site.

All in all it’s a great example of how the Murray crew could contrive a new issue from miscellaneous material, complete with a homemade cover, and end up with a standout issue.
Posted by spiros xenos at 4:21 PM 1 comment:

Late last year I briefly noted a one-shot issue titled Villain of the Supernatural which mainly contained reprints of the I, Vampire series originally published in House of Mystery #’s 305-310.

The I, Vampire series originally began in House of Mystery #290 and, with a few breaks in between, continued through to #321.