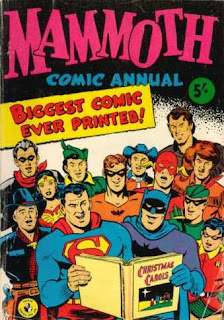 Posted by spiros xenos at 9:13 AM No comments: 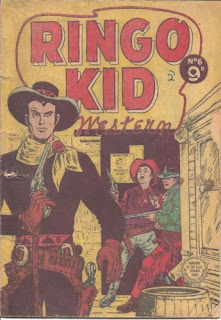 The cover to Horwitz's Ringo Kid Western #6 looks like Joe Maneely's art on the cover of Ringo Kid #1 but it’s not quite a true reprint, as the art has been modified.

I doubt any such modification occurs on the reprints inside this magazine, which feature Maneely and John Severin amongst others I have yet to identify.
Posted by spiros xenos at 8:46 AM No comments: 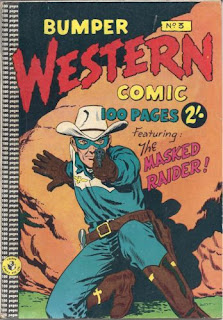 The issue contains a mix of Charlton and Atlas reprints, including some by Pete Morisi from each publisher.

The main attraction for me in this issue is the 4 pages by Al Williamson in a story titled "Where Larrabee Rode!" The plot itself is no great shakes, but it's very nice to see Williamson's art in black and white with zipatone. I'm not sure where this story originally appeared, but it was reprinted in the early 1970's in an issue of Rawhide Kid.

I understand copies of Bumper Western Comic #3 are very hard to find, and this is a beaut copy in above-average condition, as you can see from the scan.
Posted by spiros xenos at 6:29 PM No comments: