If, like me, you’re keeping track of all the Alex Toth reprints in the Australian K.G. Murray comics, then like me, you’ll be interested to discover Chilling Tales, a one-off issue, reprints “Eternal Hour!”.

But don’t get too excited, because before too long, like me, you’ll stumble across one of the best-kept Toth secrets in the land of KGMania – Haunted Tales #19, which features no less than three Toth reprints:

I’m not going to wax lyrical about the sheer beauty and inventiveness of Toth in some of these pieces. Suffice to say that if you’ve ever marvelled at Toth’s art, chances are you’ll find something else, something more, something new to appreciate in these samples.

But be aware in the middle of the three instalments is the underwhelming spectacle of Toth inked by the one and only Vince Colletta!
Posted by spiros xenos at 12:17 PM 2 comments:

Villain of the Supernatural 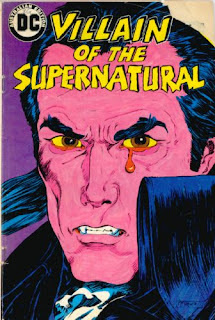 Here’s a bit of an oddball issue which turned up unexpectedly in the junkyard – a collection of I, Vampire stories from House of Mystery #’s 305-310, bookended by “The Most Fearful Villain of the Supernatural” (obviously the source of the issue title) from DC Special Blue Ribbon Digest #6, January-February 1981 (originally from Ghosts #50, November-December 1976), and “Vampire of the Apes” from The Unexpected #210, May 1981.
The cover is by Michael Kaluta from House of Mystery #310.
Posted by spiros xenos at 11:42 AM No comments:

The Adventures of Supergirl: Is this the 'missing' Supergirl #37? I'm expecting a couple of issues of K.G. Murray’s Supergirl series to arrive in the mail this week, which I expect will complete my run of this series.

I haven't really earned it. That is, I haven’t put much effort into collecting this series. It’s mainly been a matter of accumulating issues in my travels, picking up issues as they turned up, but never actively seeking them per se. Unlike the Giant Supergirl Album series, which I have sought keenly, I’ve been known to trade or sell my only copies of Supergirl if they would fetch me other K.G. Murray issues or provide emergency collection-funds.

Having said that, I’ve found myself upgrading the odd issue here and there – I think I’m enough of a Planet Comics Tragic to find flat clean sharp copies of almost anything irresistible.

But I’m getting sidetracked – the main thing I wanted to raise here was a question: Is the unnumbered one-shot The Adventures of Supergirl the unnumbered/’missing’ Supergirl #37?

Supergirl was not the only series to experience title flux circa 1978-1980. Many K.G. Murray titles from this period present tracking challenges as they changed from the Planet Comics logo to Murray Publishers, Murray the Cat, Federal and related one-shots. And other series also seem to have missing issues in this period of instability (see previous blog on Super Heroes Album #18).

To the best of my knowledge, there is no Supergirl issue #37. I have checked with a number of collectors, and no one can recall ever seeing a copy.

James and I have discussed this issue a couple of times, and we believe it is likely that the unnumbered The Adventures of Supergirl issue above was intended as the 37th issue of the series, but was simply left unnumbered (to give credit where it’s due, I think James was first to mention the possibility).

All of which is not conclusive evidence, but it is nevertheless persuasive. I leave open the possibility that there is a numbered Supergirl #37 – but I think if one doesn’t turn up in the next year or so, I’m going to feel confident deeming The Adventures of Supergirl a proxy Supergirl #37, and my run of Supergirl ‘complete’.
Posted by spiros xenos at 11:02 AM No comments: 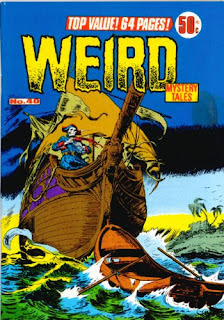 Another example of K.G. Murray’s editing of horror cover images, this time from c. 1979. Compare to the original by Luis Dominguez for The Unexpected #165, June 1975. Can’t have “children overboard” now can we…?

Kudos to James for spotting this one.
Posted by spiros xenos at 8:07 AM No comments:

...and the double-dipped Gredowns just keep on comin'... 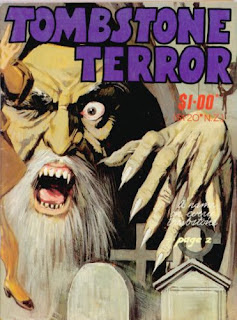 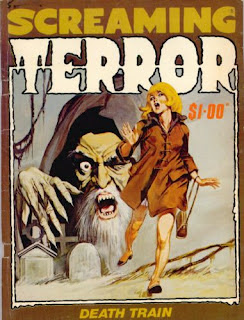 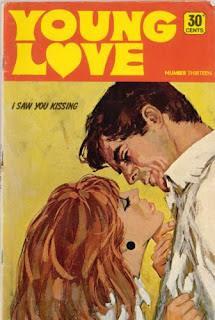 Plus the following unidentified Spanish material:

This is a great mix of material for a K.G. Murray romance comic – a bit of pre-1961 Atlas material, some Marvel stuff from the 1960s/70s, and some Spanish material to fill out the package.

Browsing through an issue like this one can’t help but be struck by both the range of art styles, and also the change in fashions. From this perspective the Spanish material doesn’t look so out of place alongside the Marvel material circa 1970.

It was the Gene Colan splash page that really struck me when I first flipped the pages (he really should have had a stint on Swamp Thing… what a shame that never came to pass…and based on some of the panels in this issue I think an issue with John Totleben inking would have been worth the cover price alone…I wonder whether they ever did work together... as usual, I digress...)

I note the US reprints of the Atlas/Marvel material, I expect it shouldn’t be too hard to track down some of this material in colour, but I also reckon that some of this art - eg. John Forte, and especially the Colan material - really is worth seeing in black and white.

Now if only this issue exchanged one or two of the Spanish reprints for a vintage DC reprint, say a few Jack Kirby pages, and maybe a Charlton reprint for completeness’ sake, it would just about qualify as the perfect K.G. Murray Romance Comics sampler. But it’s a good one regardless!
Posted by spiros xenos at 2:50 PM No comments: 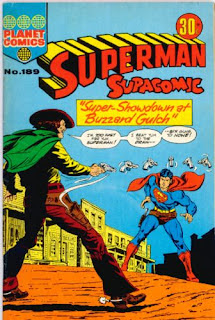 Moving along through the last dozen or so Superman Supacomics, here’s another ‘splash page’ cover to add to the list, complete with speech balloons.

I’m not sure why the original cover image from Superman #278, August 1974 wasn’t used – some of the other elements from that cover were used on other K.G. Murray Superman covers, for example the “Superman Spectaculars” and “Clark Kent, Super-Coward” images appeared on the cover of Giant Superman Album #24. (Interestingly, “The Whale with Lois Lane’s Face” was not used on Giant Lois Lane Album #14, which in that instance also appears to have been sourced from the splash page… TBC!)
Posted by spiros xenos at 11:51 AM 5 comments: