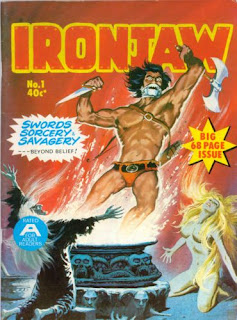 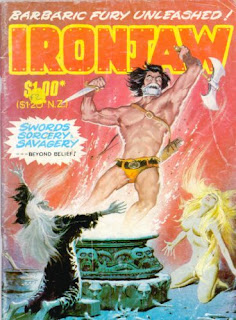 It’s quite common to come across $1.00 cover price Gredown issues which recycle previously published material, whether it’s covers (or cropped portions thereof) or complete issues. Yet what appears on first pass to be a facsimile issue may in fact have some notable changes. Case in point: Ironjaw.

The original 40c issue included the Adult rating on the cover, and proclaimed the value of the Big 68 pages. The later edition also contained 68 pages, but with a $1.00 cover price, this was no longer a proud boast. Nor was it rated for A for Adults anymore. However, there was a new compensatory banner: Barbaric Fury Unleashed! I wonder which issue sold more copies…?

The other difference is in the contents. Both issues reprint the same Ironjaw material from the original series, but they differ in the extra material offered – the 40c issue reprints a 9-page Tom Sutton-illustrated Werewolf story in the middle of the issue; the $1.00 issue offers a 9-page Spanish Adult horror story with plenty of nudity, no doubt courtesy of the lapsed.

Other than that, the differences are minor – one is paginated, the other isn’t… one includes “continued” inserts at the end of the chapters, the other doesn’t bother with them… that sort of thing.

At least they both have the same cover. It looks like an original Australian cover, probably by Phil Belbin based on the whites of the eyes and the white hair of the sorcerer on the left hand side… (I'm happy to be corrected by any Belbin experts)... indeed one benefit of the $1.00 cover issue is there is less cover clutter over the painted image.
Posted by spiros xenos at 9:06 PM

You can find more about the Ironjaw saga at mah blog: http://ohdannyboy.blogspot.com/2007/09/atlasseaboard-down-under.html