Planet of the Apes #1: The Yaffa Edition 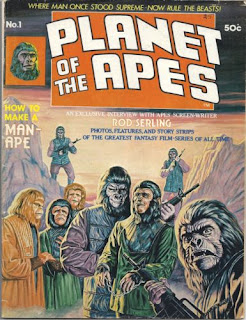 This issue was published in 1978 with a 50c cover price. Yaffa recycled this issue a few years later with a $1.10 cover price and no issue number.

I'm pretty sure Yaffa didn't publish any other POTA comics, but would be happy to be proven wrong.
Posted by spiros xenos at 3:06 PM

You could well be right about there being only one issue - I've yet to turn up a second issue.

I took the opportunity to dig out my neglected Planet of the Apes comics... and found nothing to question your theory!