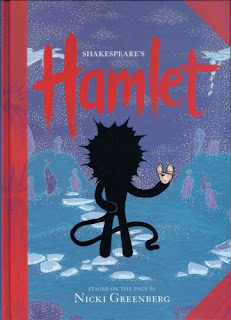 A month or so ago I attended The Wheeler Centre for a conversation between Nicki Greenberg and Shaun Tan. This was one of the best comics-related talks or presentations by practitioners I have seen in ages. It was especially interesting when they appeared to momentarily forget about the audience and just chatted about working on comics, it was a privilege to eavesdrop. And again I fell in love with an artist's sketches... here's hoping a sketchbook is published some time... Check out the conversation here. Anyway, a few weeks ago, I managed to squeeze out a review of Hamlet for English in Australia, a journal put out by AATE, which will be out some time 2011. I don't think all the articles or reviews are made available online, so I figured I may as well post it here... I've probably broken some rule doing so (gulp!)... I know I don't usually post my academic stuff here, but the junkyard's been so quiet and neglected this year...

Greenberg’s Hamlet is nothing if not idiosyncratic. Traditional realist-oriented comic book adaptations (of Shakespeare and other classics) have tended to be reductive and utilitarian; consciously foreclosing the interpretive gesture, resisting any urge to engage in creative visual metaphors, choosing instead to foreground plot and action in order to fulfil their contract to ‘explain’ the ‘difficult text’. Greenberg’s Hamlet doesn’t bother with realism, and as such has little in common with traditional ‘Classics Illustrated’-style adaptations.


Picking up Greenberg’s Hamlet prompts a number of immediate and emphatic first impressions. At over 400 pages it’s a hefty tome, a lavish production which teases and invites one to peruse its lush, vibrant, glossy psychedelic pages before settling down to an orderly reading. This instinct to pre-view the object proves to be both orienting and estranging—on the one hand it acclimatises the reader to the strangeness of the spectacle, of the design, layout and colours and the scale of the production, but it also serves to prompt more questions than one might have expected to ask on first picking up a comic book or graphic novel adaptation of such a canonical text.


For Hamlet as for Greenberg, ‘the play’s the thing’, and no doubt the pun on ‘play’ proved irresistible for Greenberg, emphasising not only the metafictional elements of Hamlet, but also the natural and inherent playfulness of her own idiosyncratic art style whilst also tapping into her abiding formalist interest in the narrative structure of comics as a storytelling medium. It is these impulses which drive the production and the most creative elements of this text.


The story is presented as a staged production, but this is a feint, a sleight-of-hand of misdirection as Greenberg cannily subverts the proscenium arch of the stage in deference to the malleable space of the comics page. Each scene begins with heavy theatre curtains framing the stage which reveals a number of fully-painted backgrounds in which Greenberg sets her characters. However these backgrounds are abstract, non-Euclidean, psychedelic, op-art planes (with at times a clear debt to Gaudi) which exhibit rather than contain Greenberg’s ciphers, who get to strut and fret in spatial exploits uninhibited by mere middle distance perspective. This freeform visual play extends to the representation and subversion of the panels and borders and speech balloons—the constituent parts of the comics page—with which Greenberg’s conducts all manner of virtuoso performances on the picture plane which belie both the middle distance perspective of the figures, and of the regular proscenium. This is a performance which begins and ends with the curtain of the stage, but the drama is played out on the plane of the page—a neat metatextual commentary on seeing the play performed, and reading the text as words or ink on the page.


This is one of Greenberg’s most inspired gestures, to equate the image with the word on the ontological basis that each are but ink markings on the page. Greenberg’s characters are ciphers, black animated inkblots with the barest definitions of animating arms and legs. They are elfin, connotative of animals or other imaginary beings, marvellously rendered by caricature and gesture. Hamlet is the most prominent inkblot shape, literally an ‘inky cloak ... of solemn black’, a malleable cipher which contorts and deforms and spreads and multiplies throughout the text, bleeding into and out of the frame, morphing in shape or colour as required by the text, a virtual Rorschach blot.


Rozencrantz and Guildenstern are rather ingeniously represented as Siamese twins sharing a pair of eyes. In his speech of clichés to Laertes, Polonius is every bit the posturing old fool, presented in a two-page spread of bubble-shaped panels, dancing like a performing clown with his cane, a caricature of the song and dance man. At times he breaks out into a multi-headed organism comically pontificating (which, in one hilarious scene, prompts Hamlet to add a ‘doo-dah doo-dah’ coda from Camptown Races). Gertrude is presented with three pairs of exposed breasts, expressing not so much a sexuality but rather a predisposition to be milked—perhaps a pair of teats each for Hamlet, Claudius and the King? Such physical traits are used as shorthand to identify and characterise the otherwise blank inkblot ciphers populating this kaleidoscopic landscape.


One of the background motifs employed is of a constellation of randomly arranged clocks—or rather, of the interlocking gears which make up a timepiece, suggesting in visual metaphoric terms that time is out of joint. During Hamlet’s soliloquy towards the end of Act 1 Scene 2, the ‘too solid’ scene ‘resolve(s) itself’ to ‘an unweeded garden (growing) to seed ... rank and gross in nature’, with thorny musk thistle leading over the next two pages to a False Saffron which surrounds an image of Gertrude and the King (‘frailty, thy name is woman’). These weeds later metamorphose into shadowy venus flytraps snapping away at Ophelia during Laertes’ speech. The fixed clockwork background morphs into a bended, refracted version during Ophelia’s madness scene, which again includes the shadowed venus flytrap visual metaphor.


If modernist productions of Hamlet operate under an influence of anxiety, postmodern interpretations such as Greenberg’s might be said to operate under a confluence of influence. For example, Greenberg riffs on Rozencrantz and Guildenstern Are Dead in her own play-behind-the-play without resorting to an explicit reference to Stoppard. At the end of each scene, the actors are seen backstage in a two-page spread in which they conduct their own pantomime, a cameo spinning off the main stage. I like the gesture represented in this narrative incursion by Greenberg—it is respectful of the canonical text inasmuch as there is no additional dialogue in these intervals to compromise the integrity of the bard’s text, yet she honours the license implicitly granted by texts such as Stoppard’s. The one time we see an actor speaking behind the curtain is in the opening pages, in which the blank Hamlet inkblot figure—it is blank and vacant so we are not sure whether he is facing us or the rear of the curtain—picks up his face, plants it on his head, and addresses the reader with an excerpt from Act 2 Scene 2: ‘I have heard That guilty creatures Sitting at a play Have by the very cunning Of the scene Been struck so to the soul, that presently They have proclaimed their malefactions’. In this short excerpt we see many of the themes of this text—the self-reflexiveness of the text, the malleability and abstractedness of the forms of the characters, not to mention the willingness to remix the order of the text with purpose and not indiscriminately.


This is a sophisticated text, confident in its critical and creative engagement with a text bearing canonical weight, conscious of its difference and strangeness, and yet uninhibited. The overall production values, the artistic scope and ambition suggest something almost avant-garde, albeit without the overbearing decoding and inscrutability this implies. It is strange, but more ‘wondrous strange’ than inscrutable.
Posted by spiros xenos at 10:13 AM