I know I get cheap giggles from colouring errors by Newton Comics and K.G. Murray and that these are generally attributed to errors to do with the colour plates, but check out this Newton variant: 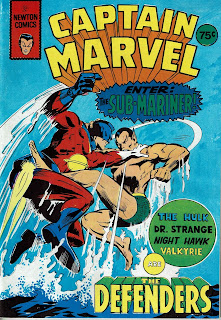 And compare it to the Yaffa edition a few years later: 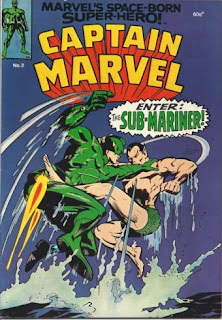 Which at least largely resembles the original: 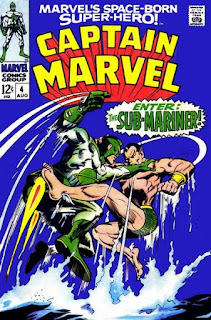 And the joke is that if I was asked which one I would have been attracted to as a young kid, I'd take the Newton ahead of both the Yaffa and the original Marvel issue, without a second thought. And I'd do so now too. 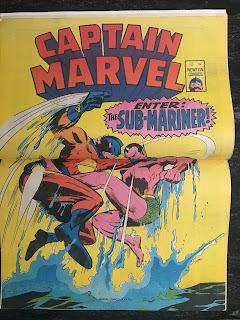 I assume the Newton cover deliberately (?) mimicked the colour scheme of Captain Mar-Vell's second costume, which replaced the green & white original in late 1969 (pity they forgot to colour one of his gloves.....). At least it sorta looks right, unlike the Yaffa edition, where the good Kree Captain appears to have been covered by some featureless green blob. Has he been slimed, "Ghostbusters" style? Colouring aside, the reproduction of the original art on the Yaffa cover looks much cruder than the earlier Newton - much of the fine details appears to have been lost, although it's not glaringly obvious until you compare the two. It's an interesting contrast - thanks!