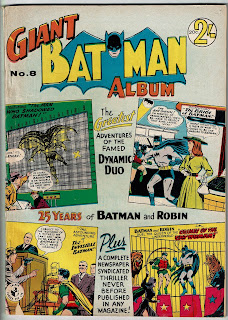 K.G. Murray's Giant Batman Album #8 is based on the US edition 80 Page Giant #5 Batman: 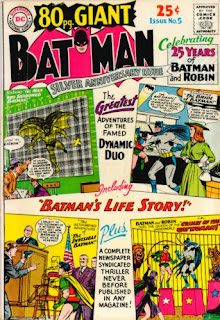 Giant Batman Album #8 reprints the cover and main feature contents of the 80 Page Giant, whilst adding a couple of fillers which are different to the ones included in the US edition.

One of the features reprinted in the local edition is [Rustling on a Reservation], a Complete Sunday Newspaper Syndicated Story, as advertised prominently in both printings.

However, the US edition contains the following single page feature, also a syndicated strip: 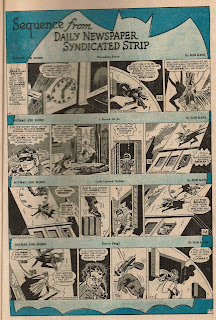 It's a shame this wasn't included in the local edition. The art is already in black and white, and assuming the blue background was printed in black, it would have made a stark and bold impact. And I'm not sure whether this piece was reprinted in any other subsequent K.G. Murray comic.
Posted by spiros xenos at 3:05 PM