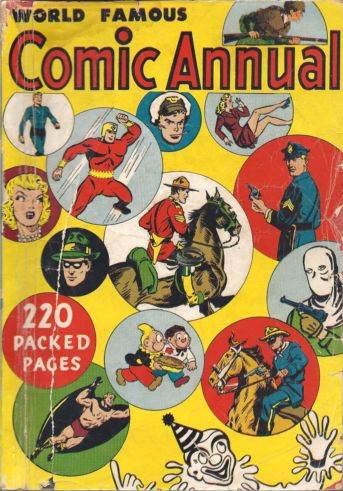 Less well-known is World Famous Comic Annual - the Atlas Publications version of Mammoth and Gigantic, which predated the K.G. Murray titles, and ran for 11 issues between 1951 and 1955, according to Ausreprints.com.

There are three significant points of difference between the Atlas and Murray issues:

1. It appears World Famous Comic Annual was a mail-order item. As per AusrReprints.com "The advertising for this comic directed orders to "Beltern Merchandising Co. 282 Queen's Parade, Clifton Hill." This is Atlas' address." This may account for the relative scarcity of this series;

3. The rebound issues in World Famous Comic Annual retained their covers, unlike the K.G. Murray issues which were coverless.

I have previously discussed other such titles with rebound issues, for example Dell's Fantastic Adventure and Daring Adventure, and Gold Key's Amazing Adventure, not to mention K.G. Murray's other minor forays into this arena with horror and romance titles such as Young Love Romances, All Love Romantic Stories and Scary Stories Annual. I expect there are others - I don't think I've seen a Transport or Horwitz equivalent but would love to spot such an animal, especially with the covers included.
Posted by spiros xenos at 5:53 PM

Nice post, Spiros, about an odd little corner of Aussie comics of which I haven't previously been aware. From that cover, these Annuals look like an interesting mixture of local and imported material- For example, that looks like it could be (US) Quality Comic’s Black Condor in the lower left corner of the cover!

If so (and I admit it may be a completely different character), while I don’t think there was ever an Australian "Black Condor" title, there were local titles for both the Quality Manhunter and Captain Triumph (neither of whom ever had their own comics in the US!), plus local reprints of other Quality characters like Doll Man, so I suppose it’s possible that the BC may have been reprinted somewhere there.

Come to think of it, the local reprinting of Quality Comics material - which of course included Blackhawk - could be a very interesting maze to track. I"m not sure if anyone has ever done so.

It is probably relevant that many Atlas comics started on the inside front cover and continued to the back cover. It wouldn't be possible for them to strip the covers like KG Murray. Is this the case with the issues in this edition?

I don't have a handle on the dating of Atlas reprints. It has been a few years since I did my last attempt to date the various changes in branding and pricing. Looking at the pattern of the (probably) monthly, long-running Captain Atom, I'd suggest mid 1952.

Despite the word 'Annual' in the title, it seems like more than one issue was released a year. I think my suggested 1951 comes from the fact that Atlas ended publication in 1958 and I once though there were eight issues of this Annual. But there are at least 11 issues, and too many for once a year.

The various Dell and Gold Key (Western) rebound editions were put out by Magazine Management (Rosnock, Jubilee etc). There are dozens if not hundreds of them. They rebound both US colour imported comics and their own Australian black and white reprints.

Here's a few more basically one-off rebound editions:
- The Giant Comic Annual. I assume it is Youngs, but don't know.
- Science Comic Annual. This was reported as Australian, but I'm not sure.
- Hurricane Hawk and Buck Rogers Annuals from Fitchett rebound issues of the ongoing series.

But really, it was only KG Murray and Magazine Management doing these rebound editions regularly.

James, you are correct about the inside front cover - every issue in this edition has the story starting on the inside of the front cover, except the G-Man issue, which ends on the back cover.

And thanks for the links to the other Annuals - I didn't know about them. Interesting to note that the Buck Rogers edition has consecutive issues rebound.