This is the cover to Newton Comics' The Mighty Thor Giant 100 Page Annual: 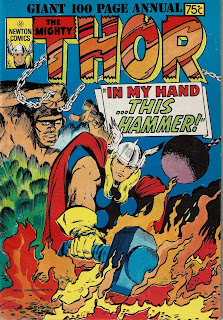 The cover originally appeared on Marvel Comics' Journey Into Mystery #120: 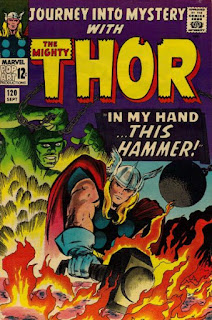 Into the Blaze of Battle!, originally published in Journey into Mystery #117, June 1965

With My Hammer in Hand...!, originally published in Journey into Mystery #120, September 1965

The Power! The Passion! The Pride!, originally published in Journey into Mystery #121, October 1965

Where Mortals Fear To Tread!, originally published in Journey into Mystery #122, November 1965

While A Universe Trembles!, originally published in Journey into Mystery #123, December 1965

The splash page to A World Gone Mad! is omitted. In its place is a modified black and white print of the cover to Journey Into Mystery #113: 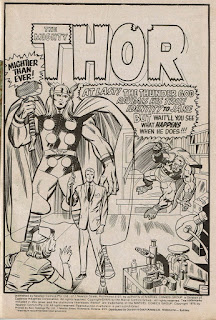 This issue does not include any in-house advertisements or editorial/letter columns, contests or posters.

As I have mentioned a number of times before, tracking the Thor reprints in Newton Comics is difficult inasmuch as they appeared sporadically and out of sequence. They first appeared as backup features in The Amazing Spider-Man series, and then in various issues such as the two issues of The Mighty Thor, Newton Triple Action, and others. Having said that, the stories in this issue don't appear to have been previously reprinted by Newton. (I will confirm this either way when I have completed my indexing of the Newton comics.)

This issue was advertised alongside others in the Sunday Observer 27 March 1977:

Given it is one of the Latest Releases and Out Now, it must have been published March 1977. The same advertisement appeared in the newspaper a week later. My old copy of this issue had a 6 marked on the cover, presumably by the newsagent, and I have also spotted another copy with a 6 marked on the cover. This data, along with my dating of the post-August 1976 issues affirms the March 1977 publication date.

As per other Newton Comics issues in this period there is no title in the indicia. For indexing purposes I refer to this issue via the cover title: The Mighty Thor Giant 100 Page Annual #NN, as does the listing on AusReprints. The GCD entry opts for The Mighty Thor Annual, which takes a bit more licence in doing so.

The other frustrating thing about the indicia is that it states Copyright 1975 by Newton Comics Pty Ltd. This is manifestly incorrect. I'll have more to say on the Newton indicia in a future post.
Posted by spiros xenos at 5:44 PM