Sharp Shooters of the Wild West 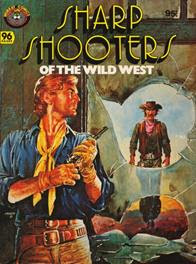 Sharp Shooters of the Wild West is another in a line of one-shot Murray Comics westerns.
This issue carries features such as Texas Rangers in Action and Cheyenne Kid, each of which was afforded its own eponymous one-shot issue in this period. This is one reason I think this issue was cobbled together from extraneous material (though I hasten to add these features did appear in other one-shot westerns too...)
The other clue is the title typeface, a generic, overused style from the 1970's/early 1980's found in many magazines and advertisements of the period, unlike many other one-shot issues which adapted existing type from other related series.
The cover is signed by Prieto Muriana, a name rather familiar to Australian readers of Gredown western issues such as Bullet Western, Gun Western, Outlaw Gunslingers and Wild Western Action, just to name a few.
Posted by spiros xenos at 1:01 PM