The 'problem' with Superman #1 solved! 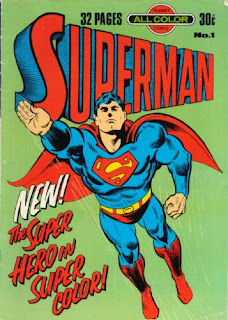 This cover has always bugged me. It looks wrong. It's supposed to be Superman flying, but he looks like he's posing, and not in a charming Wayne Boring fashion. And the linework doesn't seem right - crude and thick in places, as if it was sourced from a small image and enlarged for the purposes of a cover image (ala the Mr. and Mrs. Superman cover a few years later.) It was clearly an inhouse Murray production, intended to promote and showcase the new line of color (sic) comics, and I always wondered where the hell they got the image from.

Well, answering the second question kind of answers the others. The image was copied and modified from the cover of Superman Supacomic #198: 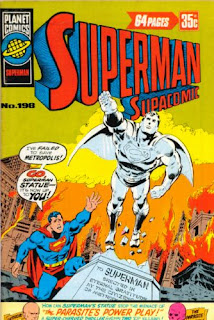 The fact that it is copied from a statue explains the flying pose, and yes, it has been somewhat enlarged and adapted.

And you can imagine the thinking behind the editorial hand in this. Launching a new title in a new format, it makes sense to make a splash with an iconic image. The cover for the feature "Midas of Metropolis!" as published in Action Comics #394 wasn't really suitable if one was looking for a heroic image: 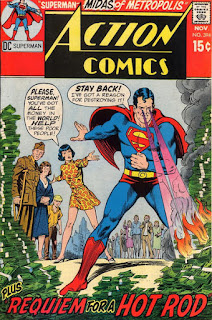 Planet Comics had a new logo to go with their new "All Color" comics, and the Superman masthead was relatively new too, having appeared for the first time around a year or so earlier on Giant Superman Album #26 or Superman Supacomic #196, just two issues before Superman Supacomic #198, which conveniently provided an authentic Superman image in a heroic pose - in black and white no less, all set for colouring in and resetting for a new cover.

Another option would have been to have used yet another rendition of the flying statue pose, courtesy of the first page to the story in Superman Supacomic #198, pencilled by Curt Swan and inked by Bob Oksner: 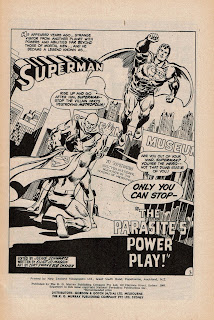 Well, maybe that would have presented its own problems when enlarged. I don't know. All I know is that the cover to Superman #1 was a blown opportunity, and as happy as I am to have solved the mystery of its source - the Junkyard is always chuffed to solve K.G. Murray mysteries - I wish greater care had been taken in this particular instance.

They redeemed themselves somewhat with the cover to Superman #2: 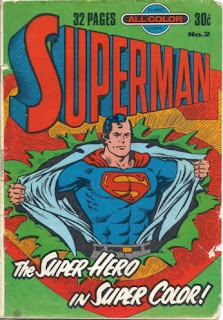 For this issue they cropped the splash page to the story "Bus-ride to Nowhere" as it appeared in Superman Supacomic #184 and had a suitable, ready-made iconic front cover image worthy of launching a new series. 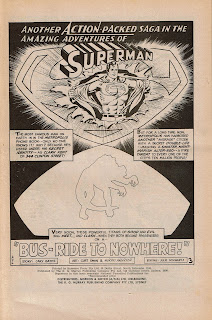 No doubt it helped that this particular image was pencilled by Curt Swan and inked by Murphy Anderson, which to my mind was the quintessential Superman art team of the 1970's. No other inker in this period did for Swan what Anderson did. But I digress.

This image would find itself repurposed by Murray a short time later to advertise the Superman line of comics, long after the All Color Planet Comic had expired: 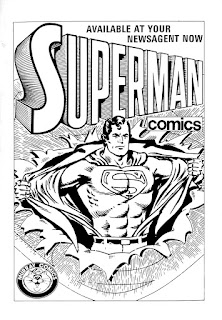 Which kind of confirms in my mind at least that this would have been the perfect cover image for Superman #1.

Due credit to AusReprints.com for the information on Superman #2 and the scan of the advertisement above.

A great pickup! I know both those covers well, but hadn't made the connection. Shame they didn't have Hart Amos at hand to do a cover at that time...