Here's a curious thing I hadn't noticed about K.G. Murray romance comics - or rather, something curious about the US sources of the local romance comics. For example: 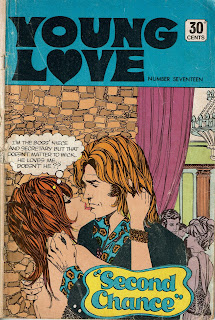 The cover to Young Love #17 originally appeared on Charlton's For Lovers Only #71. 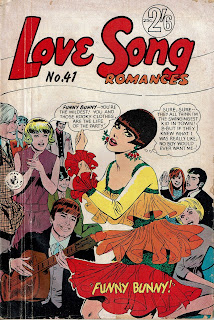 In each case, the cover is sourced from the splash page of the respective story. This was rather common practice for Australian reprint issues, but I wasn't aware it was a widespread practise in the US. Further, the Australian issues would generally source the splash page from the opening feature story. In other words, it was common to turn the cover and find the cover image facing on page 3 in black and white. What's curious about the US issues in this regard is that in each case above, the cover-featured story was the backup or support feature in the issue, not the lead feature. Was this consciously done to hide the double-dipping?

Now, this is admittedly from a minute sample of two issues. But they are samples ranging from the mid-1960's to the mid-1970's, and from two different publishers, which suggests it was not only common and longstanding but widespread. Presumably a cost-cutting measure - my understanding is that cover art page rates would be different to regular page rates. So there's a story therein which I haven't been privy to.
Posted by spiros xenos at 8:12 AM