This is the cover to Newton Comics' The Avengers Giant Size 84 Page Annual #1: 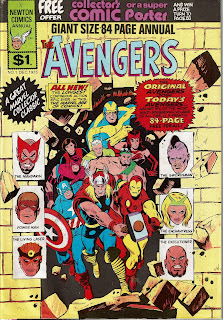 The cover originally appeared on Marvel Comics' The Avengers Annual #1: 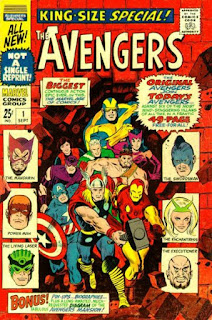 The Monstrous Master Plan of the Mandarin! [Part 1], originally published in The Avengers Annual #1, September 1967

[The Monstrous Master Plan of the Mandarin!] Part 2: To Perish by the Sword, originally published in The Avengers Annual #1, September 1967

[The Monstrous Master Plan of the Mandarin!] Part 3: Struggle...in a Strange Land!, originally published in The Avengers Annual #1, September 1967

[The Monstrous Master Plan of the Mandarin!] Part 4: ...And a Monster Shall Stalk The Land!, originally published in The Avengers Annual #1, September 1967

[The Monstrous Master Plan of the Mandarin!] Part 5: Showdown in Space!, originally published in The Avengers Annual #1, September 1967

The Strength of the Sumo!, originally published in Tales of Suspense #61, January 1965

Among Us, Wreckers Dwell!, originally published in Tales of Suspense #64, April 1965

The splash page to The Monstrous Master Plan of the Mandarin! [Part 1] does not include the Stan Lee Presents introduction to the feature title: 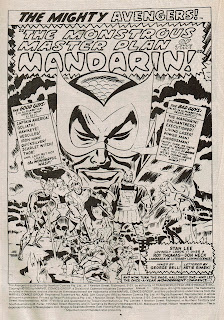 Comparing it to the reprint in The Essential Avengers Vol. 2, the Newton print is unaffected by the Originally Presented in Avengers Annual #1 editorial note on the bottom left hand corner, but presumably this is native to the Essential edition: 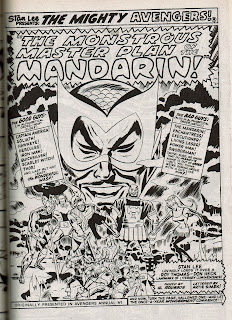 The poster in this issue is a black and white enlarged print of a portion of the cover of Man-Thing #1: 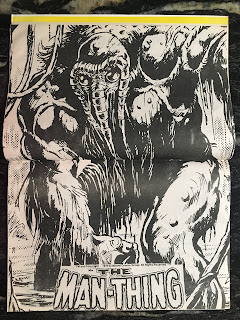 This issue was prominently advertised in the Sunday Observer, 30 November 1975: 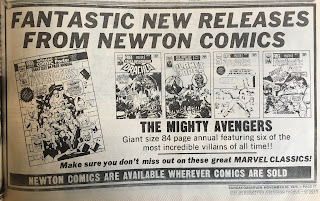 This would suggest a late-November 1975 publication date. However, it is cover-dated December 1975, and the letter column in this issue advises it is "out 13/12/75". Furthermore the following advertisement appears in this issue: 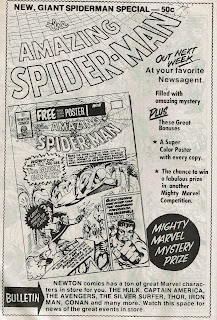 Note also that this advertisement for The Amazing Spider-Man #15 includes the statement at the top NEW, GIANT SPIDERMAN(sic) SPECIAL-50c. This ad is virtually identical to the ad for the same issue in Planet of the Apes #14, apart from the issues advertised in the Bulletin portion of the ad, and the absence of the statement at the top of this ad. This suggests to me that the ad above is the second draft of the two, and further suggests that it might have been added after the initial publication was delayed.

There are other in-house advertisements in this issue. They are: The X-Men with The Avengers #3; Captain America #1; Dracula #9; The Silver Surfer #4; Conan the Barbarian #9; and Doctor Strange #9. All of these issues are cover-dated either November or December, except for The Silver Surfer #4. This issue was cover-dated December 1975 upon publication, but like the ad for The Amazing Spider-Man #15, this ad uses a pre-production image sans the NEW GIANT SIZE MONNTHLY EDITION banner and is Out Next Week: 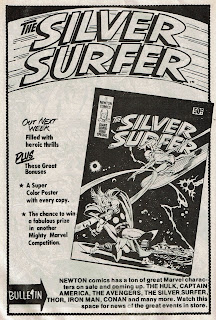 The late adjustments to the advertisements for the new Giant editions of ongoing series is symptomatic of the changes in the Newton Comics line in late 1975. This issue includes the Free Comic offer, instituted by Newton even before the Heritage Series program took effect, to deal with the overstock of returns; the Captain America Bulletin page announcing the MOST EXCITING NEW PLANS; and the editorial pages listing the new titles - but does not include the subscription page with the new titles as per other December 1975 cover-dated issues.

Interestingly this issue was advertised in Newton comics as late as March 1976.
Posted by spiros xenos at 7:40 PM