The Amazing Spider-Man #17: The Newton edition 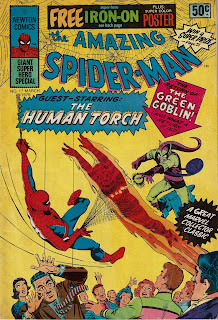 The cover is based on Marvel's The Amazing Spider-Man #17: 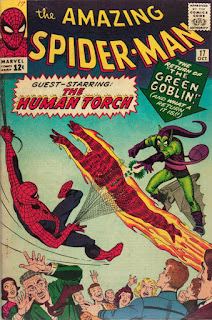 The splash page to the Green goblin story is cropped at the bottom: 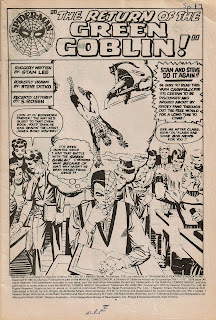 The cropping is intentional. Apart from accommodating the indicia, the references to a previous issue are deleted. At the bottom of the original page a text box advised the reader to see Spider-Man #14, in reference to the previous battle with the Green Goblin, which was quoted and asterisked in Peter Parker's thought bubble. The text box is omitted with the cropping. The asterisk referencing the text box has also been deleted, hence the space between the exclamation mark and "I wonder..." in the thought balloon.

However the main reason I included a scan of this page was to point out the marginalia. The previous owner of this book wrote Sp 17 crudely at the top of the page, and left a squiggle at the bottom of the page. Nowhere near as classy as the previous owner of  my copy of The Amazing Spider-Man #14. Just sayin'...

The final page of this story is also modified. In the last panel of the Newton edition the editorial note in the caption refers to Part Two: 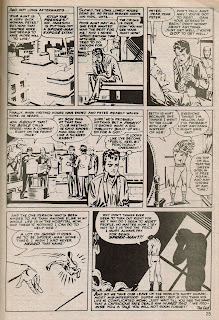 This is altered from the original which reads Next Issue.

The front cover advertises a Super Color (sic) Poster. My copy is complete - the numbered pages are intact - but there is no poster stapled within. A few months ago I saw a copy of this issue advertised online with a loose poster, but unfortunately the seller did not provide any details about the poster in his listing.

This was to be the final issue in the series and, despite the editorial hand evident above, there also signs of exhaustion in the publishing program.

For example, the Marvel Mailbag/Bullpen Bulletin takes over the centre pages of this book, and this letter column is out of place in this issue - it's the same letter column which advised the delay in the publication of The Amazing Spider-Man #16. There is no official word on the future of the line or the series, in contrast to the Most Exciting New Plans just a few months earlier.

Furthermore, and rather bizarrely, the contest in this issue reportedly expires 31 January 1976 - two months earlier!

There are two in-house advertisements for other series: Daredevil #2 and Prince Namor, The Sub-Mariner #1, both of which are cover-dated March 1976 (the Sub-Mariner advertisement omits the month but includes the issue number and the year). These would be the final issues of their respective series.

This issue was promoted via an in-house advertisement which appeared in other Newton Comics issues: 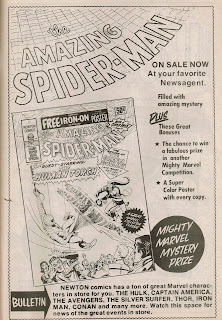 This advertisement is scanned from my copy of The Avengers #15.

And there is no longer a subscription page.

The line would splutter along for a few more weeks or so before another hiatus, and a final desperate relaunch later in the year.

Spider-Man would feature in a few more one-shot Newton issues. For example, the story from The Amazing Spider-Man #19, Spidey Strikes Back!, was published in Newton Four-In-One #1.
Posted by spiros xenos at 8:54 PM