The Amazing Spider-Man #16: The Newton edition 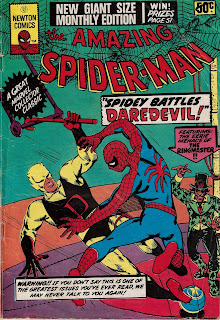 It is based on Marvel's The Amazing Spider-Man #16: 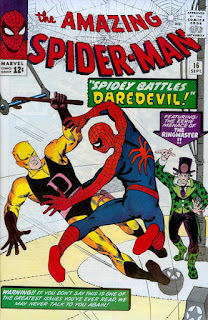 The Newton cover has been modified. Apart from the Newtonese colouring, the image been cropped on the RHS and along the bottom, and the art extended along the LHS and the top. The Warning!! text box has been resituated across Spider-Man's left foot.

Kraven the Hunter!, originally published in The Amazing Spider-Man #15, August 1964

Duel with Daredevil, originally published in The Amazing Spider-Man #16, September 1964


The last instance in which the Newton covers and issue numbers aligned with the US parent title was the previous August with The Amazing Spider-Man #5. It was managed this time around by not printing the cover to the Kraven story, and opting for the Daredevil cover which represented the second story in the issue. I firmly believe this was a conscious effort at cross promotion between the Spider-Man title and the new Daredevil series which launched earlier in the year.

Such cross promotion between these two characters had significant precedence. In 1964 Spider-Man was used to promote Daredevil #1: 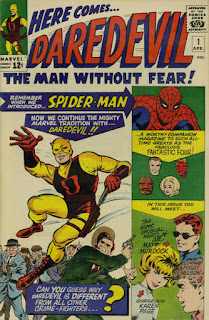 Newton's Daredevil #1 was launched January 1975 and whist the cover replicated that of the US Daredevil #1, it was also modified to reflect Newton's Historic Edition badging which first appeared on Newton's The Amazing Spider-Man #1: 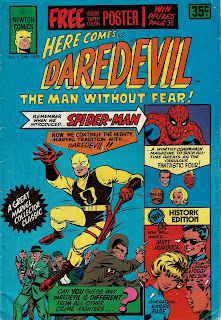 Not only that, but on the splash page to The Origin of Daredevil, the Newton editors imposed a copy of the cover to their own The Amazing Spider-Man #1 in lieu of the US edition in the original art: 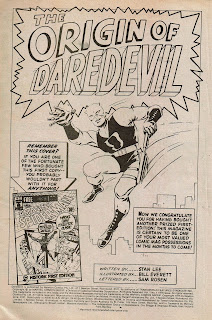 I love it! Rest assured you wouldn't get an outfit like Page Publications pulling this kind of cunning and classy editorial stunt! (After I wrote this I pulled out my copy of Yaffa's Daredevil #1 just to check - it does reprint The Origin of Daredevil as the first story, but you wouldn't know it from the cover, which reprints the cover to US Daredevil #2 and, I kid you not, they omitted the splash page altogether! And, for the record, The Horwitz edition doesn't have the cover of Strange Tales on the splash page...)

The poster in Daredevil #1 was - you guessed it - Spider-Man and the Human Torch as per the Newtonese cover on The Amazing Spider-Man #9. Add to all this circumstantial evidence the fact that The Amazing Spider-Man series skipped a month in January 1976 (and, according to the letter column in Dracula #12, was a week late), so this was the first issue in the series published after the launch of Daredevil #1, and I'm calling the Daredevil cover on this issue intentional. 'Nuff said.

The poster in this issue is a recoloured version of the cover to Newton's Doctor Strange #8: 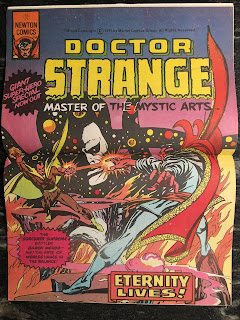 This first page in this issue logs a roll of nineteen monthly (and one bi-monthly) current titles available for a yearly subscription. This was optimistic and ambitious and ultimately ill-fated.

This issue was advertised in other Newton comics: 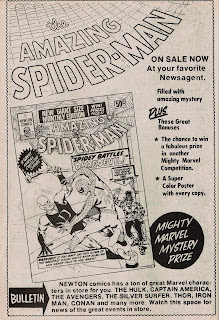 This ad is scanned from Newton Team-Up #2.

Well how about that! All these years and I NEVER twigged the significance that page 1 actually had an insert of the Newton Comics Amazing Spider-man #1. An editorial page layout decision that showed that somebody actually gave a little more thought than just rushing out with the available source material.