At the end of my overview of the final issue of Newton Comics' The Amazing Spider-Man I suggested the manner in which the end of the line was evident - in the absence of a current letter column, the lack of a subscription page, the out-of-date contest - and the fact that in April 1976 the line was suspended before being relaunched later in the year. I want to take a closer look at this period of Newton Comics.

Newton comics cover-dated March and April 1976 carried a new value-added promotion on the rear cover - a free iron-on transfer. Most of these issues offered a Captain America transfer; 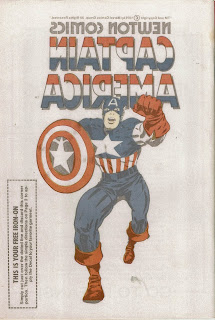 The iron-on transfer was duly advertised in the Sunday Observer: 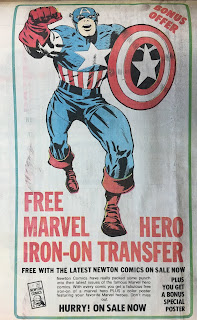 Two other transfers were offered by Newton: Hulk; 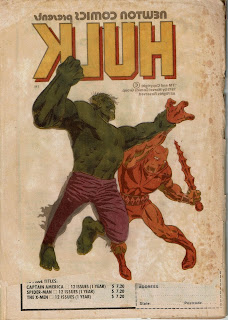 and The Amazing Spider-Man; 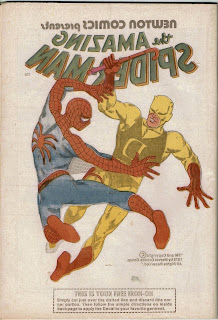 One month after the last Captain America advertisement, the following advertisement appeared in the newspaper: 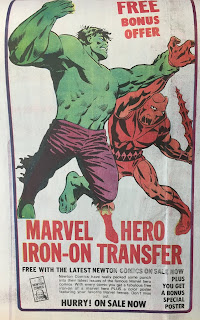 This advertisement first appeared in the Sunday Observer 9 May 1976, and ran weekly over two months until 18 July 1976.

In his article "Hearken to Me Faithful Ones!" The Rise & Fall of Newton Comics, as reprinted in Word Balloons #6, October 2007, Robert Thomas says:

Early in 1976, Maxwell Newton voluntarily called in the receivers to get his newspapers and finances in order, only to be dismissed as manager of his own company by telegram from the receivers in April of that year. For the second time Newton Comics were halted as a scheme of arrangements for the Newton group of companies was announced... Newton Comics underwent a further consolidation of titles when printing resumed in August 1976, using whatever supplies of proofs were left. titles were amalgamated into giant eighty-four page and 100 page titles...

At this point you are probably asking the same question I asked myself: Why were there advertisements for Newton Comics in the Sunday Observer during May-July 1976 when Newton Comics was not producing new comics?

In order to reconcile the contradictory evidence I chatted with Ash Long on the phone, and he offered some plausible explanations.

One is that paraphernalia such as t-shirts and Planet of the Apes kits  advertised in the Sunday Observer did a fair bit of business, so it may have been that the Receivers deemed it viable to run these ads to newspaper readers even though there were no new books being printed, given they primarily focussed on the transfers. Presumably orders would be filled by existing stock.

He said another explanation is that in this period "the right hand didn't know what the left hand was doing." If the production side of the company and/or the advertising arm of the newspaper weren't in concert with one another, advertisements which had been earmarked to run may have run despite other factors impacting on the business.

Ash also said that at the time, if newspapers found they had a blank space to fill and a printing deadline loomed, they would sometimes resort to running previously published ads, whether they were current or not, and face consequences as such later.

In other words, it's uncertain  whether it was an active or a passive decision to run these advertisements during this period, nor who was responsible.

I personally sourced the advertisements referenced above from copies of the Sunday Observer held in the National Library. The collection is incomplete. The advertisements appeared on the rear cover of a supplement titled Modern People. There is a month gap between the last Captain America advertisement and the first Hulk advertisement. From memory, the papers in this period were all present but, given the month gap, I am now second-guessing whether all the supplements were intact. If they were missing, it is possible there were advertisements in this period featuring the Spider-Man transfer. 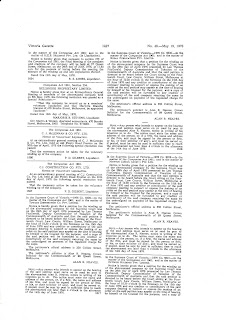 The notice is of the presentation of the petition 29 April 1976 to wind up Towart Distribution Co. Pty Limited., Newton Comics (Aust.) Pty. Ltd. and Regal Publications Pty. Limited.
Posted by spiros xenos at 12:33 PM

No offence to Ash Long’s theory, but I find this doubtful:

“…if newspapers found they had a blank space to fill and a printing deadline loomed, they would sometimes resort to running previously published ads, whether they were current or not, and face consequences as such later.”

From my experience in the newspaper industry…

Of course, if the ‘Sunday Observer’ was an independent, Maxwell Newton could run whatever ratio he wanted.

The Receivers would have wanted to maintain a ‘minimum’ income level per edition of the Sunday Observer to pay Creditors and keep the publication afloat to attempt to trade out of the situation.

Having said all that, I could begrudgingly agree with a theory about the Receivers okaying the adverts to run IF there was no other paid advertising space booked – as it may be plausible if the paper was badly run by Newton and his staff.

Also, those Newton Comics adverts appearing on the back of the “People Magazine” supplement have me scratching my head. The back cover is prime advertising space (i.e. Revenue!). Such ‘magazines’ are often printed separately and any ‘full colour’ used needs to be subsidised by paid advertising. I can only presume there were other colour, full page adverts that paid for it in the same edition.