The Amazing Spider-Man #8: The Newton edition 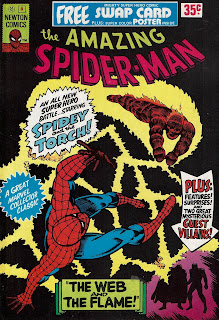 The cover is from Marvel's The Amazing Spider-Man Annual #4: 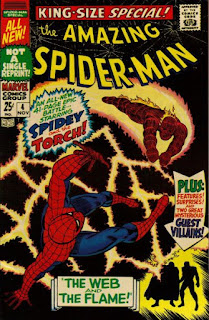 The Spider-Man lead feature marks short term suspension in the presentation of the Lee/Ditko stories. The Thor backup feature is reinstated in this issue. The various GCD entries for the Thor story reference it as The Demon Duplicators, as does my Marvel Masterworks: The Mighty Thor volume. The two features in this issue are partial reprints - the first 21 pages of the Spider-Man story and the first 6 pages of the Thor story. Both stories contain a To Be Continued... text box in their final panels. This appears to be the only significant modification to the stories. Presumably the splash page on The Web and the Flame! is cropped for the indicia. There would be significant modifications to the second parts of these stories in the next issue.

This issue includes a colour poster and a swap card: 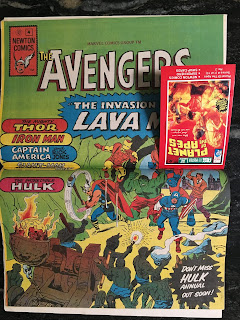 The swap cards first appeared 13 September 1975. The cover price was raised on the fortnightly titles to $0.35 and the page count was reduced from 44pp to 34pp. The letter column advises this was due to a "(s)hortage of newsprint and high production costs".

This issue was advertised in The Avengers #11: 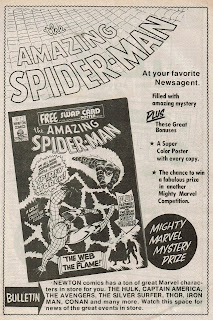 Note the issue number is missing on the cover.

There is also an in-house advertisement for Doctor Strange #2. This is a pre-production image  - it doesn't include the swap card advisory - but it does affirm it is now a fortnightly series.