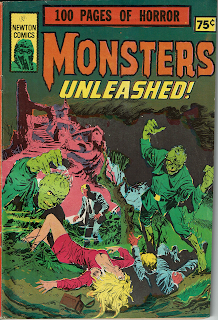 This one's been bugging me for years - where the hell did the cover for the Monsters Unleashed! unnumbered issue from Newton Comics come from?

It's not from the original Monsters Unleashed! series, as per the other Newton and Yaffa editions. And it's not culled from art featured in the interior of the issue, which seemed the most likely source.

In fact, it's from "Demon of Slaughter Mansion!", originally published in Monsters Unleashed! #5, with art by Juan Boix, a name admittedly unfamiliar to me.

"Demon of Slaughter Mansion!" had previously appeared in the Newton edition of Monsters Unleashed! #1.

These are the relevant pages: 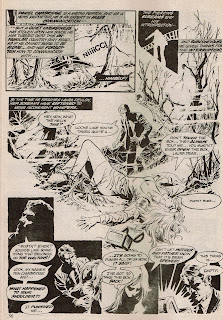 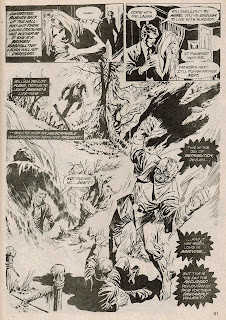 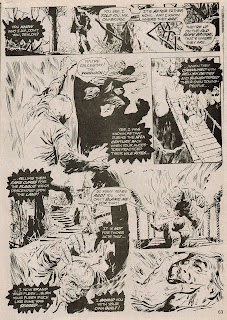 As you can see, three separate images were cut and pasted together to form a montage for a single image.

I had always assumed that it was at least two separate images pasted together, and for some reason I thought the images may have been from a 70's Swamp Thing comic - it looked to me like it may have been Alec Holland, Abby Cable and the Un-Men on the cover.

But it ain't. And the Junkyard is quite chuffed to have finally solved this little mystery.
Posted by spiros xenos at 9:43 AM

Of course that raises the further question of why somebody decided to go to so much trouble! We'll never know the answer to that, but they certainly created a fine mystery.

I FINALLY found and picked up this elusive missing issue from my collection in November last year on eBay. I did have it in the early 80s when I had a near complete collection back then but I had given my entire collection away in a Trash and Treasure sale. Loved these bumper special issues.

Yes, it's one of the scarcest Newton issues. I had a scummy copy as a placeholder for ages until I scored an upgrade.

And to Mark's comment re: the trouble someone went to in order to contrive a cover - as we now know, the post-August 1976 issues were all rather crude cut and paste jobs. I'll be addressing these very soon.