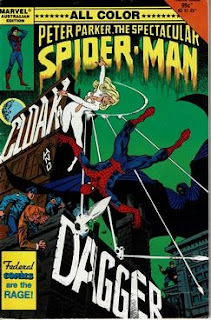 This is an odd issue. And not just because it's advertised as All Color and is in fact a black and white issue.

It's odd because there was no ongoing Peter Parker The Spectacular  Spider-Man series from Federal Comics. This is a single, belated, unnumbered Federal Comics issue of a US series which, by 1985, had well and truly established itself as a long-running series of over 100 issues, albeit playing bridesmaid to the primary Spider-Man title The Amazing Spider-Man.

It's odd because the source material dates back to 1982, which provided the initial stories for Federal Comics' ongoing The Amazing Spider-Man series, sourced mainly from The Amazing Spider-Man, apart from some initial Marvel Tales content, which suggests they had the material for this issue - and possibly more - available and ready to go, but did not use it.

During their tenure as local Marvel publishers Page Publications managed to publish a Peter Parker The Spectacular Spider-Man series alongside their The Amazing Spider-Man series, even if it was for just a year or so.

So somehow Federal Comics missed the boat on this, and appear to have rush-released this single issue not long before they pulled up stumps on the DC and Marvel range of comics. 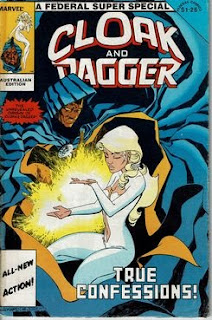 Around this time Federal Comics also published a single issue Cloak and Dagger comic. This featured the banner A Federal Super Special. To this point this banner had been a virtual imprint, reserved for reproducing local editions of the Marvel Comics Super Special series of album-sized comics such as Dune (as well as humour magazines such as CARtoons)

In this instance the banner has been applied to this single unnumbered Cloak and Dagger issue from 1984 which is based on the Cloak and Dagger 4-issue mini series and has regular production values - no cardstock covers or colour printing - with a higher than usual $1.25 cover price and 84 pages.

My guess is, having made the decision to publish this Cloak and Dagger issue as a faux Super Special, Federal decided to piggyback their unused Cloak and Dagger/Spider-Man material onto this issue.

So maybe there is an explanation for the appearance of this one-shot issue of Peter Parker The Spectacular Spider-Man after all. But I still think it's odd.

Update: This issue was published between June-August 1985. The Battle of the Sounds advertisement on the rear cover ends August  1985. I can confirm this advertisement ran for at least three months in other series published at this time.

Update 26/1/20: I have spotted a copy with 10 written on the front cover. This confirms the publication date of July 1985, just as it is clear this issue was on the stands in some areas as late as December 1985.
Posted by spiros xenos at 12:16 PM