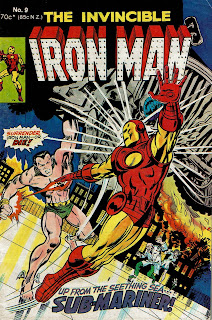 And I don't have a copy of The Invincible Iron Man #8 to check - nor do I recall ever spotting one - but I'm betting that it is also a 'tall' digest. And the date - should it come to light - will be no earlier than September 1981, and not later than February 1982. So let's say November 1981. Just calling it now.
Posted by spiros xenos at 10:37 PM