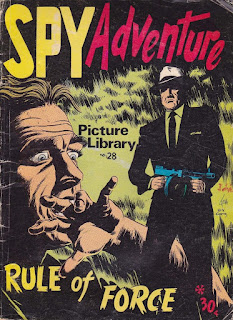 When Keith Chatto was charged with the duty of providing the cover for Spy Adventure Picture Library #28 he did what he was presumably often asked to do - copy and adapt the cover of the source material, in this instance, S.A.T.A.N. #10: 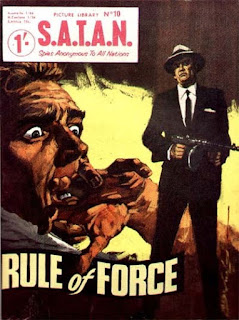 However, when Rule of Force was reprinted a short time later in Spy Stories Picture Library #4, he did his own thing: 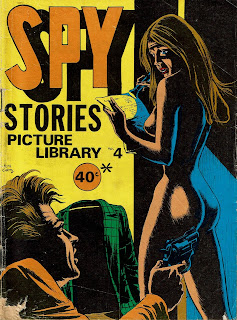 There are many instances in which Chatto adapted a panel from the story for cover duties on Yaffa digest comics, but this is not one of them - the T&A is all his own.

Indeed, the cover appears to be related to an earlier cover illustration by Chatto for Mystery Suspense Library #2: 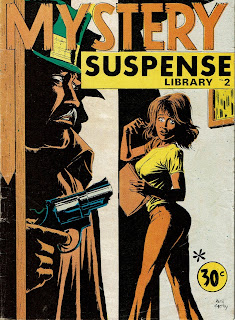 Obviously not identical, however the various elements - the gunman on the left, the girl on the right looking over her left shoulder, papers in hand - are clearly very similar in the two images. And again, the image does not appear to be related to any panel in the story Shoot Me an Epitaph! It is quite possible that this image is related to the source material, but I have not identified the source.

Curiously, this image was recycled shortly afterwards in the next issue of the same series: 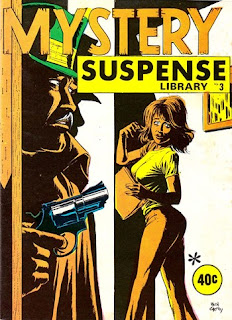 According to AusReprints this issue contains the story Black, the Blood Of Evil, which is odd for Yaffa as they would typically recycle stories with a new cover rather than recycle covers with a new story. Which suggests to me that Chatto may have been, shall we say, rather frustrated at missing an opportunity exercise his creativity and imagination on this issue, and duly rather mischievously took his frustrations out on the poor girl at the next opportune moment.
Posted by spiros xenos at 5:25 PM