Longtime readers of this fair blog may recall my perverse appreciation for printing errors on Murray Comics and Newton Comics - samples for the cause include Bumper Western Comic #1, Superman Supacomic #87 and Captain America Giant 100 Page Annual. Perfectly pukey, right? Well, if you feel the bile rising maybe the proper edition can serve as mouthwash: 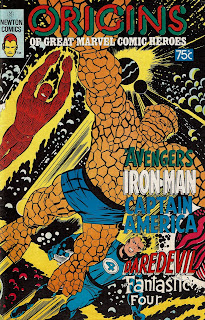 This cover image is taken from an interior page in Fantastic Four Annual #6: 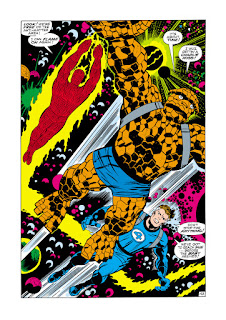 As you can see both linework/inking and colour modifications are evident on the repurposed image. No doubt the purists amongst you will choke on your secondary bile at the heresy of such modifications.

But not me. I reckon the existence of the blue stinker kinda compensates for the initial crime against Jack Kirby and Joe Sinnott.

Interestingly both versions of this Newton comic were widely distributed at the time and can still be found, unlike the Captain America Annual which, as far as I am aware, was only ever issued in its pukey glory.
Posted by spiros xenos at 5:02 PM

I really love this issue! A nice collection of Marvel origin stories, almost the Newton version of Stan Lees "Origin of Marvel Comics" and a top fave of all the specials