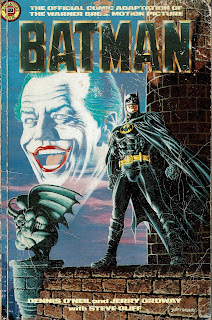 This rather battered specimen of a Batman comic found its way into the Junkyard last week. It's "The Official Comic Adaptation of the Warner Bros. Motion Picture", published in 1989. This is the deluxe, prestige format edition. There was also a regular edition.

The interesting thing about this issue from the perspective of the Junkyard is that it's an Australian edition, published by Budget Books in Melbourne, under the Adventure Book imprint. I don't know anything about this mob, other than what the GCD entry tells me, which is that they published some comics-related books in the mid-1980's/early 1990's.

I don't see a price on the cover so I don't know whether it was significantly cheaper than the US edition. It's also possible that it had alternative distribution to the regular comics network - say in bookstores or cinemas.

Federal Comics ceased publication of DC superhero comics in 1986. If they had run another few years more this edition may have had a Federal Comics logo on the top left hand corner.
Posted by spiros xenos at 8:38 AM