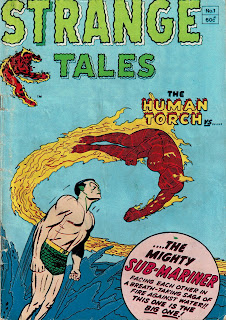 Page Publications' Strange Tales #1 is a bit different to most Page Marvel issues of the era because it doesn't reprint sequential issues of the parent series.

The cover originally appeared on Strange Tales #107, and the main features of that comic are duly contained within the Page Publications issue, but those stories are found in the middle portion of the book. Strange Tales #1 actually begins on the inside front cover with a black and white reprint of the cover to Strange Tales #100: 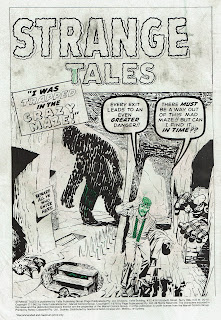 I don't know why there are 6 issues of Strange Tales missing in the Yaffa series. It's possible they were reprinted in another series. It's also possible that the licence was for the Human Torch series as part of the super hero package, and Strange Tales #100 was surplus which was put to use. Whatever the reason, it is an exception to the rule to find Yaffa Marvel editions not reprinting sequential issues between their covers. Some rejigging of the formula has been identified in issues late in a series, but this is the only issue that comes to mind to begin a series in this unorthodox fashion.