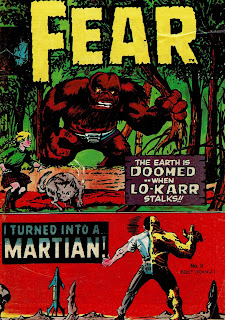 Fear #3 is the first digest-sized issue in the Page Publications series - the previous two were covered some ten years ago when I knew very little about Page Publications comics, and there was a lot of speculation and second-guessing on my part.

This issue reprints the cover and main contents of Marvel's Fear #4.And wouldn't you know it - the only feature from Fear #4 not to be included in the Yaffa edition is the second story featured on the cover: I Turned Into A Martian! Of course, this is due to the differing page counts of the respective issues, but one would think a 5-page story featured on the cover could be swapped for another 5-page story which would not be so conspicuously absent.
Posted by spiros xenos at 5:44 PM