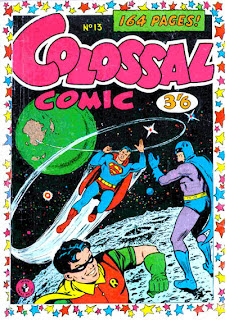 When I was in Grade 2 the teacher gave us an exercise. We were each given a picture, cut out at random from a magazine, and we were to write a story involving the picture – the scene, the characters, a plot. I remember that only one kid in the class managed the exercise correctly. The rest of us made the mistake of simply describing the picture we were given.

I’m really glad that the picture I was given was not the cover to Colossal Comic #13. I think that if I was charged with explaining why Superman is flying from Australia to greet Batman on the moon while Robin is distracted with chasing after something elusive in the foreground – without any breathing apparatus at all! - my 8-year-old brain would simply have short circuited and gone into meltdown.

Or maybe not. Maybe it’s just perfect for an 8-year-old brain. So be it. I’m happy to leave it at that. And relieved I’m not being challenged to explain it today, let alone tie it into any continuity.

PS image courtesy of AusReprints.
Posted by spiros xenos at 10:23 AM