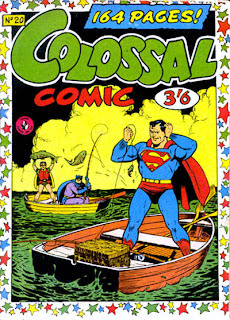 I think it’s fair to say the Hart Amos Superman was scarcely a power fantasy. For the most part he was a bulky, soft-edged, pudgy figure – I think of him as an idiosyncratic synthesis of elements found in Wayne Boring, Kurt Schaffenberger and Al Plastino. He resembled the leaner ‘modern’ Curt Swan Superman the least of all the Weisinger-era Superman artists. And of course this Superman was no stranger to a bit of light-hearted buffoonery. It's as if Amos only caught him at leisure, on holidays.

Amos was adept at a more ‘mature adventure’ style as evidenced by his Devil Doone work, but on the basis of his Colossal-style covers, I believe he would have been perfectly suited to rendering C.C. Beck’s Captain Marvel. DC has long struggled to integrate Captain Marvel into the DCU, and it never quite gels. However, he would be right at home on these covers!

Superboy The Adventures of Superman When He Was a Boy: The Three Who Defied Death!
Otto Binder/Curt Swan
(Superboy #37, December 1954)
Note: Original is 10 pages. This version has some crudely enlarged panels, extending the story by 2 pages.

Superboy The Adventures of Superman When He Was a Boy: Public Chimp Number One!
Curt Swan/Creig Flessel
(Superboy #38, January 1955)

I Raced Death Around The World
Bill Ely
(My Greatest Adventure #6, November-December 1955)

Superboy The Adventures of Superman When He Was a Boy: The Amazing Elephant Boy from Smallville!
Curt Swan/Creig Flessel
(Superboy #31, March 1954)

The Statue That Came To Life
John Prentice
(House of Mystery #37, April 1955)