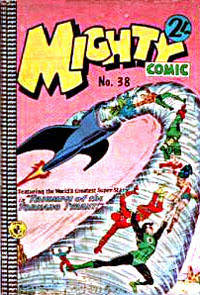 The Space Ranger: The Army of Enemy Space Rangers
Phil Kelsey
(Tales of the Unexpected #78, August-September 1963)

I picked up a few Mighty Comics this week, most in rough condition - hence the cover scan above courtesy of AusReprints.com - but it's hard to pass up the chance at a few JLA-era Mighty's regardless of the condition.

This batch has helped me fill in some gaps in JLA appearances in the Mighty's. Strange as it may seem, they were not always the cover feature, even for key JLA issues, so if I get the chance in the next few days I'll look at tracking the early JLA appearances in Mighty Comic.
Posted by spiros xenos at 2:09 PM