Here's a gallery of my complete run of Yaffa/Page Publications' The Spider-Woman, with notes below. 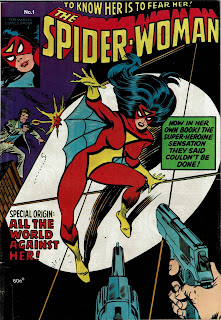 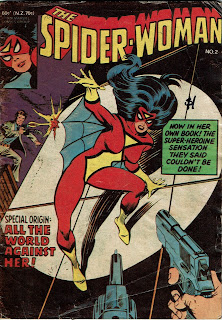 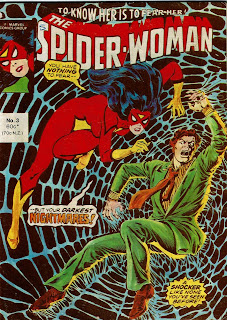 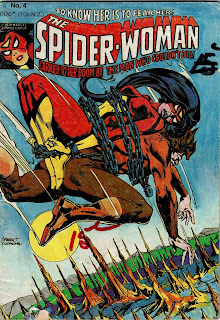 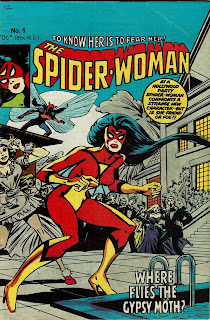 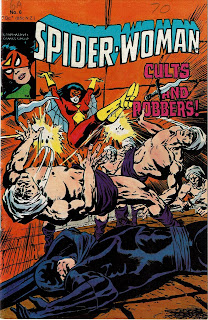 I believe this is the complete run of Yaffa's The Spider-Woman. I'm unaware of further issues in the series, nor of any recycled reprints beyond April 1982.

1. The Spider-Woman #2 is a digest-sized reprint of the first issue. Typically Yaffa recycled issues of an ongoing series at the end the series, say with a $1.10 facsimile edition, or as a $0.75 digest edition. However it is not unprecedented for recycled issues to be issued with a legitimate issue number and to take their place in a series. The fact that there is a 2-year gap between the two issues means #2 is printed under the ruling format of the day for Yaffa.

2. All issues have a Yaffa copyright date except for #6, which is not unexpected for a 'long' digest issue, especially if it's the second of two 'long' editions in a series.

3. It's a bit surprising to find 6A pencilled on the cover. As I've said before, I don't know what the A represents, but assuming the 6 refers to June, this designates a publication date of April 1982, maybe March 1982. This is one month later than the May 1982 stamp on my Ghost Rider #10 digest, which has been my benchmark date for the end of the 'long' digests, and indeed for the 'new' licensed material for Yaffa. For the moment I'm going to stick with May 1982 as the last on-sale date for the $0.70 'long' digests - the stamp is more authoritative to my mind than the pencilled 6A, partly because I don't know what the A means, and partly because there is also a 70 marked on the cover in pencil, presumably a price - which is redundant. Further, there is no currency symbol alongside the 70, all of which mitigates my confidence in the information. But if more such indicators turn up re: June 1982 I'll happily revise my schema accordingly.

4. Note I've placed the date for The Spider-Woman #4 in brackets. This is because the newsagency markings for #3 and #4 are out of sequence. As I've said before the newsagency markings are the best guide for gauging the sell-by date but they are not always reliable. So, assuming the 5 marked on #3 is accurate, and assuming the 12 marked on #7 is also accurate, I've just placed #4 midway between the two.

5. I have some compelling evidence that the on-sale date is 2 months after the publication date, but the same evidence can be interpreted as being the purchase date, not the publication date. I accept that there's strong anecdotal evidence that the shelf life of the Yaffas is 3 months, maybe even 4 months, and that it can vary. This is appealing inasmuch as it would go some way to mitigating the confusion in this early/mid-1982 period of flux. It is also quite plausible that newsagents may have purposely extended the shelf life of their Yaffa stock given the apparent long lag between issues.

Postscript: Re: purposely extending the shelf life of issues - a friend has just noted that the newsagents would be dictated to by the distributor in this regard as they had to return covers for unsold comics. This makes sense. Consider that little theory retracted.
Posted by spiros xenos at 10:58 AM