Yaffa's Marvel digests: The long and the short of it

The 'short' editions - the standard size for digest comics - superseded the regular/magazine-sized Yaffa Marvel comics which were published between late 1977 and early 1980.

The 'tall' digests appear late in 1981 - all the ones I have in my collection appear to have been published after August 1981 - and coincide with the price increasing from $0.60 to $0.70. This is the digest format which remains in force until the 'short' editions return in 1982 with a $0.75 cover price, and the post-licence recycling phase begins.

It's interesting to compare a couple of issues. Here's a scan from AusReprints.com of the 'long' What If Spider-Man Joined The Fantastic Four? #1: 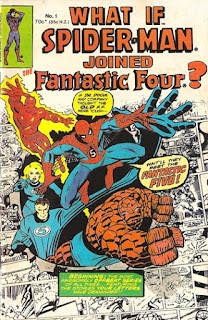 Compare this to my copy of the 'short' What If Spider-Man Joined The Fantastic Four? #NN: 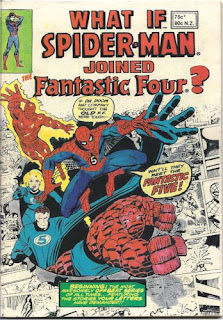 Note that the 'short' edition has the art cropped at the bottom. Note also that the 'long' edition appears to be cropped on the right hand side. I'm not sure if this is true, or whether the scan on Aus.Reprints.com is cropped. Given both editions are 13.5cm wide I wouldn't expect such a difference, but I can't say for sure as I don't have to hand any such pairings of 'short' and 'long' to compare.

I guess that such pairings are thin on the ground as the 'long' editions were published at the end of series and the 'short' recycled editions were primarily reprints of the earlier issues of a series. What If Spider-Man Joined The Fantastic Four? #1 appears to be the only issue in a projected series, so I'm guessing this is why it earned the honour of being recycled. I'd like to compare the contents of such a pairing to see if the interior art is affected. A random comparison between a 'short' and 'long' edition does suggest there is a difference.

A note about the term "digest size". Collectors often refer to them as pocket-size. I have no issue with that, but I note the Grand Comics Database uses the term "digest". I also note that at least one brand of digest backing boards measures their boards as 189mm x 143mm.

Update: Mark Muller has confirmed his 'long' copy does not have a Yaffa date in the indicia, only the Marvel date 1977, which is what I expected. He also confirms the scan above from Aus.Reprints.com is true and has not been unduly cropped on the right hand side. His copy has 5 written on the front cover, which accords with my 'long' copy of Ghost Rider #10, all of which indicates to me a publication date c. February/March 1982.

I also note there is a copy of the unnumbered $0.75 edition scanned on AusReprints.com which has an 8 written on the cover. This indicates to me a publication date of May/June 1983 - 1982 is unlikely so soon after the first edition, and the Yaffa Marvels had ceased by mid-1984 when the Federal editions were being published.
Posted by spiros xenos at 3:26 PM