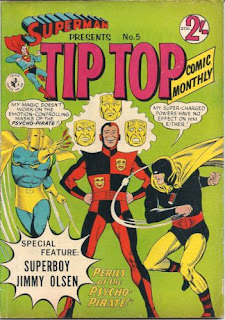 I’ve been enjoying reading the Crisis on Multiple Earths: The Team-Ups Vol. 2 over the last week or so. These are familiar stories to longtime DC readers of course, but I’m reading many of these for the first time.

Well, sort of... Much of it is familiar even if I don’t recall reading it before. Many of the storylines have been referred to in other comics, and many key images or panels have also been reprinted as excerpts in books and magazines and the internet which I’ve seen over a period of time.

The first volume is a different matter as it’s mostly material which is quite familiar to me. Truth is some of it I’ve only read for the first time in the last 5 years or so, but regardless, it’s an altogether different reading experience. Seeing the stories laid out in chronological order is particularly welcome. And it’s really a case of part reading, part browsing, part ‘refresher’, and all utterly and luxuriously indulgent – frankly, it’s a fanboy fetish!

One thing that occurred to me as I was browsing through them is that most of these stories also happen to be featured on the K.G. Murray covers.

There’s something appealing to me in seeing well-known images in a new setting or context. For example, the two Dr. Fate and Hourman Showcase covers by Murphy Anderson are quite famous and beloved by fans, and there’s something which appeals to me in seeing the Tip Top banner above those images, the pre-decimal pricing, the Superman Presents mascot. Even with the Showcases in my hands a mental overlay of the Tip Top banner imposes itself without conscious effort.

Anyway, thought it might be a bit of fun to list the K.G. Murray reprints of the contents of Crisis on Multiple Earths: The Team-Ups Vol. 1 TPB:

Secret Origin of the Guardians! is the anomalous one in this regard. I am unaware of a 1960’s Australian reprint. Green Lantern was one of the DC titles not regularly published in the K.G. Murray reprints in the 1960’s. There were reprints of Green Lantern appearances in Showcase reprinted in All Favourites Comic, but the material from the Green Lantern title would not be reprinted in any substantial form until the 1970’s series Green Lantern Album and The Original Green Lantern – but this is a story for a future blog.

I was talking to a recent acquaintance on the weekend who has all of the original issues. I mentioned in passing that I could see him devouring the TPB – I just assumed the regular rationalisations: reading copy, spare, always wanted one… He told me he didn’t bother to buy it as he already has the all the issues. Quite sensible of course. Admirable restraint. But I’m betting this might just prompt him to sneak a few stray K.G. Murray’s into his collection if he comes across them. Especially if no one’s watching. Or, maybe moreso if there’s a risk in being caught out.

It’s the fetish factor.
Update: Secret Origin of the Guardians! was indeed reprinted, in Wonder Comic Monthly #97.
Posted by spiros xenos at 4:31 PM