Ya got love cheesy romance covers...! Check out the cover to K.G. Murray's Falling in Love #76: 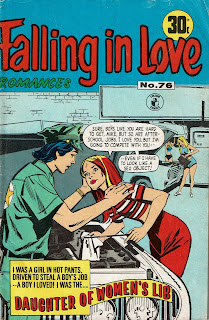 This cover is adapted somewhat from the original, which appeared on DC's Young Love #106: 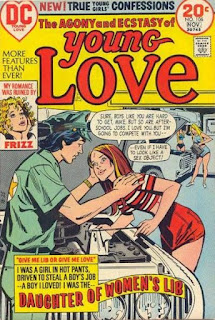 I'm not sure whether it was intentional or not, but notice that Sue's hot pants have morphed into a skirt on the Australian edition. My guess is it's an 'honest' colouring error rather than an exercise in prudery. Nevertheless, it does undermine the narrative thrust, so to speak.

The other point of interest is that the cover to Young Love #106 includes an inset reference to another story, apparently titled My Romance Was Ruined By Frizz. If that's not wacko enough for you, get this - the story is actually titled Imprisoned By Frizz, and also appears in Falling in Love #76: 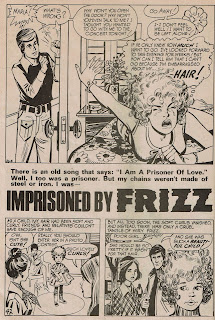 I would have happily accepted an adapted splash page and caption to this story as an alternative cover to this issue.
Posted by spiros xenos at 9:37 PM