Storm Warning: Lover's World #8 - and the query over Unforgettable Love #1 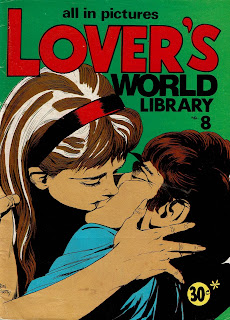 The cover to Lover's World Library #8 features a rather modest, demure romantic image by Keith Chatto - certainly milder than the cover he produced for Lovers World Library #12: 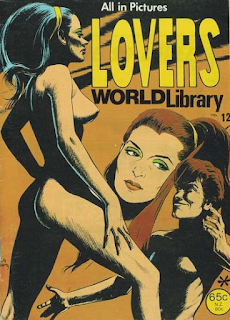 Now that I look at these issues more closely, I'm not so sure that Storm Warning was previously printed in #1 - compare the cover scan on AusReprints... 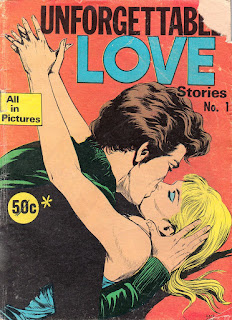 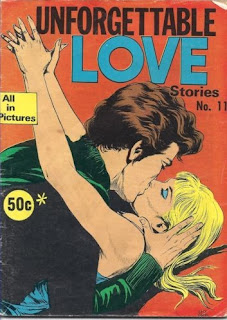 ...and I wonder whether the cropping on the right hand side of the cover to #1 has also chopped the second digit off #11, making it appear as #1.

Inconclusive - but it doesn't appear likely that 11 issues of a single Page Publications series would have been issued within such a short time frame as to carry a $0.50 cover price on each issue.

Update 1/6/2018: Storm Warning was published by Page Publications under a new Chatto cover in Personal Romances #1: 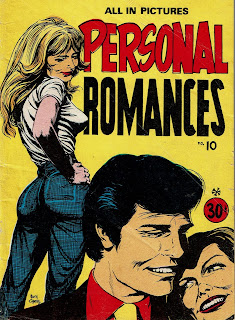 I'd suggest the problem with #1 or #11 is either a binding or guillotine error. This happens all the time as print jobs are trimmed to size.

If you have dupe copies of any particular comic, you'll often see the cover appears to be 'positioned' slightly different due to such errors.

This should never be an issue except it highlights an inexperience graphic artist who didn't allow 'fat' within the trim boundaries. You should NEVER have any wording close to any of the three edges, or the spine.

Yeah. The LHS of #1 is wider than #11 too, which does suggest it was cut incorrectly.

So, all things considered, do you think the #1 is really a cropped #11?

I'd say without a doubt they are the same comic. Your research also points to that conclusion.
Also, on a reprint the colour may vary a bit - possible different press, possible different pressman, etc. These look very similar so would most likely be the same print run.
However, as a caveat, print quality can vary within a print run as the operator makes adjustments during the run - but I doubt these guys were worried too much about quality so probably just used set-and-forget.