Collectors of early-1980's Murray comics will be familiar with the Second Release sticker which could be found on magazine-size issues such as Carnival of Fear: 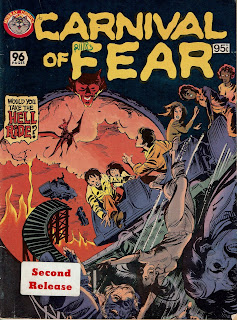 This sticker was applied to a range of magazine-size issues, samples of which may be found on the  AusReprints gallery.

The initial publication of these issues appears to be from mid-1981 until late-1982, possibly even early-1983.

A number of my copies have a newsagency date 11 pencilled on them. My copy of Carnival of Fear above says R11/83. The rule of thumb on such newsagency markings is that they designate a final on-sale date, and an initial publication date three months prior, which suggests that the Second Release issues were available for purchase c.August 1983.

By my reckoning the transition period between Murray and Federal - based on the transitional logo - was March-June 1983, so timing a re-release program of inventory stock c.August 1983 seems about right.


Some time early/mid-1984 Federal released coverless rebound editions of these magazine-sized Murray issues in volumes such as Scary Stories Annual and All Love Romantic Stories. These would appear to be the coverless returns of the Second Release issues - in effect, they are Third Release titles.

To this point I'm pretty happy with the data and analysis. However, as is often the case with these endeavours, questions beget answers which beget further questions...


If you take a closer look at the cover to Carnival of Fear above, you can clearly see a 6 marked in the C of the title. If this is a newsagency marking on the Second Release issue it conflicts with the R11/83 marking. However, if this is a newsagency marking on the initial release of the issue, it would date the original publication of Carnival of Fear to c.March 1982. This date is possibly correct, but it is not certain. The rear cover of Carnival of Fear carries an advertisement for Murray's tabloid-sized Batman Family, which was likely published in December 1981 and which, on the face of it, would suggest a similar publication date for Carnival of Fear. However, I have noted other issues carrying this advertisement which are dated early 1982, and it wouldn't be out of the question to find such premium one-off issues having an extended shelf life. Therefore, pending further data, it is quite plausible to date Carnival of Fear c.March 1982.

Such conflicting dates are not isolated to my copy of Carnival of Fear. Other issues, such as The Witching Hour also exhibit this anomaly. The conflicting newsagency date markings suggest that the Second Release issues may have been on sale on the stands before their Second Release incarnations, and as such were returned stock to Murray which Federal inherited, rather than overstock, which was my presumption.

I don't want to overstate the last point. It's guesswork based on an anomaly based on a small sample. As more data comes to hand I'll be happy to revise and amend my position.
Posted by spiros xenos at 12:54 PM

Interesting. In the 1970s newsagents where I grew up in Mackay wold tear off the masthead an just send that back as proof of return. As a child, I got a lot of such ‘damaged’ comics from a friend of my parents. I have assumed that the rebound editions were from warehouse overstocking, but wondered if the damaged comics were returned and reused.

In the 1990s, however, I was aware of a local newsagent bundling up complete magazines for returns. This was in Sydney. I don’t know if or when something changed in distribution, or whether more didstant regional areas had a different process to save on freight.