The Murray/Federal Tarzan: Dating the 100-pagers

I don't profess any expertise when it comes to Tarzan comics. I read some as a kid, and at some point I understood that 'jungle comics' weren't for me. Same with The Phantom and Black Panther. I prefer Heart of Darkness.

Having said that, the Murray/Federal Tarzan series, published between 1980-1983, interests me greatly for the simple reason that the indicia indicates an on sale date. For example, see below: 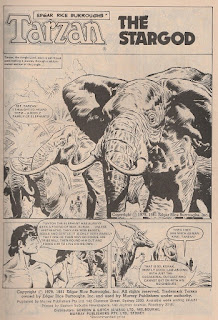 This is page 3 of Tarzan #4. The indicia states in part "Available week ending 24. 4. 81". That's right - a fully fledged publication date, down to the week, is recorded in the indicia. If only all the Murray comics were dated thus.

I'm sure there's some reason for this, likely concerning the licensing, but that doesn't concern me. What does interest me is that all 23 of the Murray/Federal Tarzan issues contain such information, and given they range from the  $0.90/100 pages Murray issues in 1980 to the Federal comics incarnation in 1983, they provide a guide as to when the price and page count altered. and, of course, this provides a guide to the rest of the Murray/Federal stable.

This how they slice up:

I consider this a reliable guide - a ready reckoner - to dating the 100-page Murray/Federal comics between 1981-1983.

This is not to say that there aren't anomalies or outliers. Even some of the Tarzan issues have some discrepancies eg. newsagency dates which don't quite tally with the indicia dates. But on the whole, having crosschecked some two dozen or more comics from this period, the dates are firm.
Posted by spiros xenos at 10:12 AM

For what it is worth — I did a similar review at some stage and agree the dates are consistent, despite a few minor variations. I have most of the series and started getting everything into AusReprints, but for distracted... I also like the series for the Spanish artists.