Texas Rangers in Action, One-Shot Murray Westerns, and the Absurd Drama of the Never-Ending Quest. 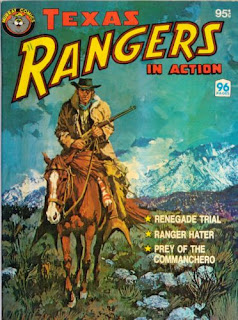 When it comes to one-shot Murray Comics Westerns, I think there’s only one workable theory: There’s Always One More.

Don’t even think in terms of a finite wants list. Think instead of a wave, with ebbs and flows, shallow ends and deep centres, quiet moments and hot spots, quantum particles and virtual black holes. Only then will you be properly primed for this particular absurdist quest.

Then, when you’re ready for your zen moment, in which you decide Enuff! The Quest Has Ended, you can take one more peek over your shoulder, knowing full well you will spot the likes of this Texas Rangers in Action one-shot. Bang.

But it will not matter. Your task will have been done. Your karma will be settled. Your angst just a memory. Your loss a balanced ledger. Yes, you will understand without a shadow of a doubt there are more Murray Western one-shots out there. But it will no longer matter as it once did. You will have moved onto the second stage of collecting Murray comics (seeking upgrades!). The circumference is everywhere, and no centre can be drawn until this point.

Yes indeed. There’s Always One More. But the question is: How Much Is Enough?
Posted by spiros xenos at 12:41 PM