World's Finest Comic Monthly #21: The cover without a story... 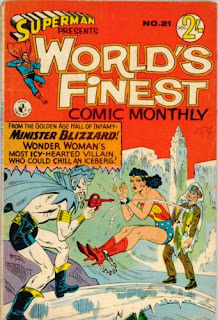 What's wrong with this picture...? Well, staring at it for hours might not provide any answer... but flip through the book and you'll realise the problem quicksmart: the story featured on the cover doesn't appear in the book!
That's right - the cover is reprinted from Wonder Woman #162, May 1966, but the story The Return Of Minister Blizzard! had already been printed three months earlier in World's Finest Comic Monthly #18.

The main Wonder Woman feature in this issue of World's Finest Comic Monthly is the back-up feature from Wonder Woman #161, April 1966.

Even with all of the charming quirks of K.G Murray's reprint comics, you could pretty much depend on seeing the cover feature leading the issue - and in the rare instances when it wasn't the lead feature, at least it was represented somewhere in the pecking order.

But not this time. Someone screwed up. Don't blame me. I just call it as I see it.