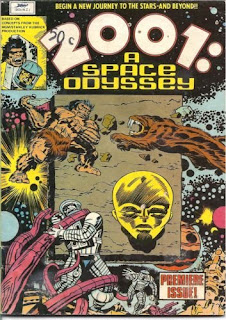 When I first spied this digest edition of 2001: A Space Odyssey, a mischievous thought occurred - could this be a decoloured and reduced version of Jack Kirby’s tabloid adaptation from 1976?

No such luck. The irony would have been acute, but really, I knew better because I not only recognised the cover from the 1st issue of the 10 issue U.S series, but also from the regular-sized Yaffa reprint from 1978.

What I couldn’t quite recall offhand was the contents of the full-size Yaffa edition. Turns out it reprints the first three issues of the U.S series.

Which I would have safely guessed anyway, but I was second-guessing myself when I was pondering this late last night because the digest edition also includes a reprint of Paul Reinman’s “I Defied the Curse of Tut-Ah-Anka!”.

This probably means that “I Defied the Curse of Tut-Ah-Anka!” also appears in a Yaffa reprint of Fear… maybe in Fear #1, assuming it exists, but it’s not in the Yaffa Fear #2.
Anyway, if you haven't read Kirby's 2001 and you're fond of the movie and come across this little edition, don't let the size fool you - by the end of it, you might find you've bitten off more than you can chew!
Posted by spiros xenos at 8:21 AM